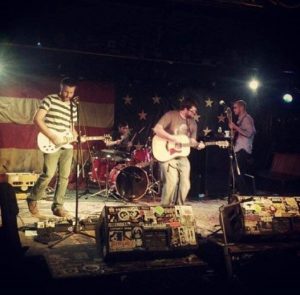 Music of substance—this is what the band Waterwells creates. Their smooth folk-rock indie sound is partnered well with meaningful lyrics that translate to real emotions, hopes, and desires.  As a group of guys with a Montevallo connection, they played their first show back in 2014 at the Black Market Bar and Grill. Since then, they have played all around the Birmingham area including Cahaba Brewing, Saturn, Syndicate Lounge, Seeds Coffee, and even festivals like Side Walk Film Festival and Crestfest.

The guys, Chris Davidson—lead singer/guitar, Jeremy Allinder—bass, Josh Argo—guitar, and Jacob Freeman—drummer, have felt very lucky to play in a city that supports local artistry like Birmingham. “Even if it’s a small venue or only a few people show up, it is such a privilege to play in a city that’s not an industry town but has a lot of music opportunities,” says Davidson.

As the founder of the band, Davidson has written most of the lyrics for their songs, and prefers to write with the music. “The way I write songs is very much an emotional release. If the song and the lyrics aren’t complete in about forty-five minutes, I won’t come back to that song. It’s in the moment, and I focus on the direction I feel the song is going,” he says.

Davidson’s in-the-moment songwriting is on display in the band’s first EP, Waterwells. Argo was a geometry teacher at the time they were writing the song “Before I Was.” Davidson was thinking about this while looking down at the tile floor and says that “for some reason the tile made me think of the geometry theory that explains how we don’t see full lines. We see segments. Then all of a sudden I got the first line—the idea of hoping for something that is eternal and goes on beyond what we see.”

It is these little inspirations that form the lyrics. Davidson wasn’t certain what would come next, but he often builds the songs off of those first lines and goes from there. He described the lyrical process as somewhat linear and somewhat narrative even when they don’t tell stories.

They cite some of their influences as Counting Crows, Switchfoot, Deathcab for Cutie, and Red Hot Chili Peppers—in other words, they grew up as ‘90s guys. But when it comes to influences, it’s not the same as “making a pizza or a cake by the recipe.” The music is a lot more abstract because the four of them are absorbing so much music and might sometimes reference a feel of another artist, but they are not necessarily influences.

The band is returning to the studio this summer to record a second EP. Davidson is especially excited about a song called “A Light in the Distance.” This hope-inspiring song has simplistically powerful lyrics that center around the desire Waterwells has that in the midst of difficult and divided times they would help others when they see them hurting and struggling without waiting. Davidson says, “Despite our difference, we are still in existence at this moment. Motivated by both my humanity and my faith, I can respond to the hurting around me.”

The chorus features the words, “When they see/ A light in the distance/ Will it be us?/ I hope it’s us.” To that end, their next EP will be a very unique one. All of their proceeds are being donated to a charitable organization to help those in need.