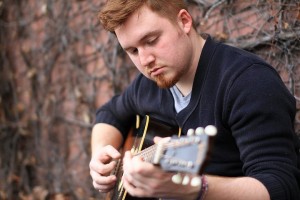 “I think every song is essentially about something the songwriter believes in or how love has affected him or her,” says folk singer/songwriter Justin Cross.

Cross has kept a guitar in hand since he was 14, when he found one at his father’s fire station. A year later, he began writing his own music. Now, he has two albums, a new EP, and a spine-chilling single.

With musical tastes influenced by blues, folk, and a few centuries of hymns, Cross has a natural sense for Americana. His voice is low and earthy, and guitar work ranges from simple strumming to some elaborate finger style. Cross uses his talents to share thought-provoking explorations of spiritually and the meaning of life. There’s even a song or two about a girl.

A friend used to introduce Cross’ performance with the tease: “This is Justin Cross. He sings songs about men dying.” “I always hated that, but there is some truth to it,” says Cross. “I sing a lot about death, but only as a bridge to ask questions about what may come after.” Thoughts on faith weigh heavily on Cross’ songwriting. Penning lyrics as a “recovering cynic,” he has developed a way to breach the subject of faith and afterlife that provokes without preaching.

“Daughters Holding Flowers,” the opening track from Listening to Ghosts, questions what life means if there’s nothing else afterward. Characters in this somber story take life and love for granted, then lose it all without ever understanding what its worth.

When he’s not contemplating life itself, Cross can turn out a charming love song. The 2011 stage recording, Live at the UCF House, has several bright excursions. The cheerful “All I See Is You” celebrates affection with a few flattering hyperboles. It also demonstrates some fast finger work. “Amelia” is a sunny love letter featuring piano by Nicole McLean.

You’ll find a few instrumentally aggressive numbers in Cross’ portfolio. “Ten Hail Marys” boasts a sinister riff. The live version enjoys a fine electric accompaniment by Joel Madison Blount. “What It Is (What It Ain’t)” gets the lead out of a standard blues progression, allowing the band to cut loose for a few minutes.

With the release of 2012’s Another Winter, Cross strikes a balance between thematic sincerity and musical vibrancy. In “Can’t Take Another Winter,” he delivers lonesome lyrics of the return of cold winter through a melody that would be equally suited to fairer days. In “Billy Dyer,” the tempo remains up just enough to keep the mood from getting too melancholy while Cross sings about life of wandering.

Cross’ single, “Drink the Water,” is a haunting folk lament sung from the edge of perdition. The song drips with backwater desolation as it turns over platitudes: “I know of sin by the things mama prayed / I know of Heaven by the light at its gate,” sings Cross. Between the ominous guitar riff and the groaning of Lori Cheng’s cello, the song guarantees to raise a few goose bumps.

His thoughtful songwriting is right at home in Birmingham’s engaged folk scene, with acoustic venues like Moonlight on the Mountain and artist communities like Grey Haven readily available. “I never thought of Birmingham as a music city, but the culture here is perfect for it and the mentality of the musicians helps nurture it,” he says. “There is so much collaboration and teamwork happening.”