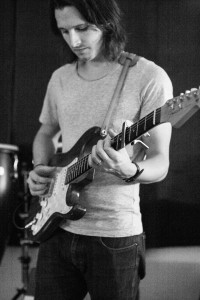 Music has been a major part of Craig Stilley’s family for generations. From hard rock to church hymns to country, he has been surrounded by music of all kinds. Stilley grew up in Gulf Shores, Alabama, and first started singing and playing in his church. It wasn’t until his participation in Birmingham’s Grey Haven that he began performing as an artist. Grey Haven gave musicians a chance to perform with fellow artists in the area. This opportunity helped him realize the potential of his skills and sparked his interest in really taking music seriously.

Birmingham is a melting pot of unique opportunities for musicians and artists. Stilley has played at numerous local venues such as Sound & Page, Hart and Soul, and Common House. Based on his experience, he feels that “Birmingham is becoming a staple of the south as far as music goes. It’s unbridled, there’s no stigma when it comes to the creativity in Birmingham; it’s able to create whatever it wants.” Birmingham is an exciting place for artists, many of whom continue to grow creatively along with the city.

Evidenced in the songs of his EP Bloom, Stilley writes about difficult ideas and situations as his attempt to deal with them. He reveals that, “I’m not trying to give an answer per say, but I’m trying to find an answer. The answer is usually God or sacrifice or love, though the ideas are typically masked behind how difficult things are.”

He writes not only for himself, but also with the hope that his thoughts and ideas will help others discover answers to their own problems as well. Stilley puts great value in musicality itself, saying that, “Music should teach you about life, even without words. Sometimes you can’t understand what it’s teaching you at the time, but it’s teaching you whether you know it or not.”

Fans of Stilley’s music are in for a surprise as he drifts away from a solo act into a collaborative band. Though he has enjoyed his time as a solo artist, his feels it is time to combine others’ talents with his own to create something even greater. He wants listeners to get the full extent of a song’s musical impact and emotional potency that can only be experienced with accompaniment. Current band members include drummer Kyle Carpenter, bass player Daniel Elliot, Luke Sides on keys, and Joel Madison Blount on electric guitar. Together the band will be introduced as A Slim Shadow.

Not only is Stilley adopting new members, he is also adopting a new sound. The band intends to drift away from their expected folk tunes and venture into new musical territory. Though he is still trying to figure out the style himself, Stilley describes it as a fluctuation between ambient and rock, channeling vibes of both Radiohead and Bon Iver.

“It doesn’t feel as restricting as what we were playing before hand,” Stilley says, “We want to be defined by what we do and not by what people expect of us.” The band is excited about their voyage into fresh genres and wants listeners to be excited with them as they introduce their new sound to the public.

A Slim Shadow will perform at Seeds Coffee on June 5th. Prepare for a concert full of soul, ambiance, and spontaneity. Every bit of music will be new.