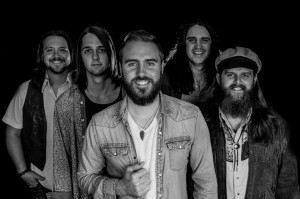 This Saturday, The Vegabonds perform at WorkPlay with Bama Gamblers and Seminole Strut. Coming down from Nashville and following a world tour, The Vegabonds are no strangers to Alabama’s music scene. In fact, they’re natives.

“Four of us met at Auburn University back in 2009,” says singer/guitarist Daniel Allen. “We all came together through mutual friends and basically two bands that fused together.” Three albums later, the band is now based in Nashville. The band’s geographic diversity is apparent in their style, a sound that can’t simply be labeled Southern rock.

The Vegabonds seamlessly bridge neighboring genres, blending roadhouse blues and classic rock, while maintaining a forward trajectory through new Southern influences. Old-school Southern acts like Skynyrd or 38. Special shine through on their records, as well as recent groups like The Black Keys. Their upcoming album, What We’re Made Of, received an engineering treatment by Grammy-nominated producer Tom Tapley.

They’ve resonated with audiences at home and far beyond, embarking on two extensive European tours. “I had never been to Europe before, so to be there for the first time on a tour playing music it was truly a dream come true!” says Allen.

The tour was a whirlwind of eye opening experiences, culture shock, and high-energy moments like their gig in Aviles, Spain. “The crowd was so great,” says Allen. “Our normal set on that tour usually lasted about an hour and fifteen minutes, but that night the crowd kept the energy up cheering for encores and we ended up playing for two and a half hours!”

Back home, The Vegabonds have just released a video for their new single, “Oh My Lord.” It’s a heartfelt moment of vulnerability, translating the difficult feelings Allen experienced with the loss of his grandfather. “The idea behind our video for ‘Oh My Lord’ is to relate the story of losing a close friend or family member, and having someone there to help through that tough struggle,” he says.

“Oh My Lord” is one of 12 tracks from their new album, more of which you can hear this Saturday when they return to the Magic City. “Birmingham has always been one of our favorite spots to play,” he says. “We have a lot of love for Birmingham, and we can’t wait to be back at WorkPlay on the 26th to play another great show along with our buddies Bama Gamblers and Seminole Strut!”