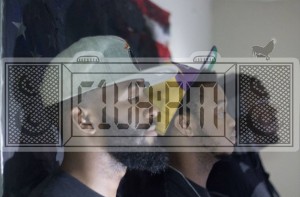 Birmingham’s C1ub A.M. shares the stage with two big acts this week. The group’s been riding a wave following a successful gig at Secret Stages earlier this summer. The buzz has recently caught the attention of some touring acts, and afforded them the opportunity to perform with Bone Thugs-N-Harmony this Halloween at Avondale Brewing.

While the drum-heavy rhythm is an integral component of their sound, melodic interludes and eclectic samples set the groups style apart. The diverse samples serve to complement and contrast the group’s typically weighty themes. “A lot of samples come from old records, from decades ago,” says Love N Sin. “You hear music from difficult times. The experiences they had back then are relatable to things going on now.”

C1ub A.M. treats their writing as a collaborative process, and each of the artists imparts their input in the lyrics. “The music gets three different perspectives as we bring it together,” says Love N Sin. “I look at how your background -your upbringing and experiences- influence who you are. You have to acknowledge what you’ve become and why. Don’t be ashamed of who you are.”

“Recognizing your own self gives the music a soulful feel,” says Jett. “The most valuable things in life stays with you after you’ve been through it.”

The group also acknowledges that differences inevitably arise as separate paths converge. “Not everybody learns the same lessons at the same time,” says Chris. “Other people that you met, even your peers, they’re all learning and growing as people at their own pace.”

You can catch them tonight at Zydeco supporting Joey Bada$$ on his World Domination Tour.

C1ub A.M. will also perform at Avondale Brewing Company with Bone Thugs-N-Harmony this Saturday at 8 p.m.