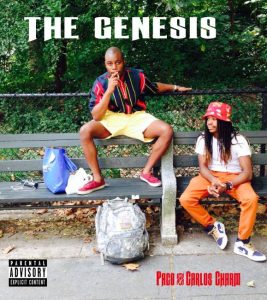 The hip-hop duo The Monastery understands that to achieve anything positive, you often have to address the negative head-on.

The group formed in 2010, as Carlos Charm and Paco displayed cohesive potential while developing their own projects. “We were both heading in the same direction writing lyrics and preparing to go somewhere with it,” says Charm. “A mutual friend saw us both doing similar things and encouraged us to put it all together.”

One might not conjure images of cloistered monks when the first thumping bass notes strike the ears, but the duo very deliberately arrived at their name. “We meditated on the name a while,” says Charm. “The monastery is where monks live, where they meditate, grow, and become one. We want to have that effect. We hope our music can bring people together.”

As a duo, Charm and Paco trade-off on vocal/mixing duties depending on where the vision comes and goes. “We draw from a lot of different places,” says Paco. “With most of the beats, I like to use samples, while Carlos is a great composer.”

Charm’s musical background reaches from middle school band, where he played percussion. The beats have become more complex since then, and Charm has utilized a number of electronic tools to expand his mixing vocabulary. “We try a lot of different things, so each track has its own feel,” he says.

And their method is effective. The moody undercurrent of “Tides” is a world apart from the bright Motown samples in “Down N Out.” “We’re looking for an old-school vibe,” says Charm, “and the sample-based beats we use are great for that.”

Influences span hop-hop old and new, and reach well-beyond genre lines on several occasions. Charm has sought inspiration from the likes of Jay Z, Biggie Smalls, Lil Wayne, J. Cole, Andree 3000, and Eminem, while Paco has drawn from 2Pac, A Tribe Called Quest, Kanye, Wale, Common, Neo Soul, and others. “If it has soul, I can work worth it,” says Paco.

Since the duo’s formation, each artist has compiled a catalogue of their own material parallel to their collaborative efforts. Paco’s side projects include Tales of a High School Nothing and 2015’s By Any Dreams. Charm’s efforts include The New Testa ment, The Feast and the Famine, and the empirically tragic EP, The 5 Stages of Heartbreak.

While the Heartbreak collection demonstrates Charm’s sincerity and lyrical expertise, the duo doesn’t bring it out on stage very often. “It was something I wanted to do in the moment, but I feel like our time on stage should be focused on the positive,” says Charm.

In pursuit of positivity, Monastery soon arrived at their latest collection, The Genisis. “Just Going In,” stands out as one of their first major collaborations. Composition is well layered, the underlying bass lines support a rise-above attitude and confident delivery. Samples accent the conscious flow without ever crowding the message.

On the flipside, Paco’s “Me Myself and Jody” rolls out at an unflinchingly steady clip. The aggressive deep-bass track is startlingly honest and tragically topical. It’s not easy-listening, but it raises a lot of questions worth asking, and plenty that are long overdue for answers.

The Monastery keep an optimistic outlook, though, and that extends to their local music scene. The Pleasant Grove duo believes that Birmingham’s hip-hop scene is expanding to accommodate up-and-coming artists. “There’s a lot of great things coming out of Birmingham hip-hop,” says Charm. “I think we could see a break-out act from here very soon. That could point a spotlight on the hip-hop scene that we have here.”

We are due for another hip-hop act to emerge from the Magic City, and The Monastery is confident that they have what it takes to make that leap. “I know we have that potential,” says Charm. “I believe we could be one of the best things in hip-hop.”