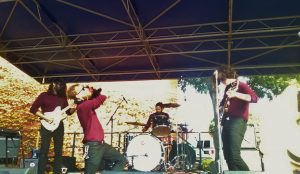 Gleefully aggressive and relentlessly groovy, The Burning Peppermints are a permanently-stoked garage rock outfit blazing a trail through our music scene. Their set is an onslaught of deep, dirty guitars and inescapable riffs, all delivered with wild enthusiasm.

The Burning Peppermints formed in 2012, after a drummer left their kit at guitarist Jake Wittig’s home. Not letting it go to waste, he soon began covering garage rock tunes with percussion pro Breely Flower.

Early efforts displayed the influences of Led Zeppelin and Jack White’s various endeavors, but the group’s most recent songs pick up a West Coast vibe and the suggestion of John Dwyer (Thee Oh Sees) and Ty Segall.

Over the course of numerous gigs, demos, and lineups, The Burning Peppermints have arrived at a riff-heavy approach to psychedelic surf, with a dose of punk and garage rock. “It’s a lot more than any single genre,” says Wittig. “It’s fun, loud music first, then ideas come together out of that.”

The group’s current lineup consists of Jake Wittig on guitar/vocals, Ahmad Farzad on baritone, and Ryan Colebeck on drums. 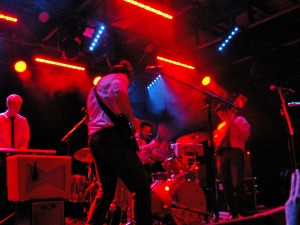 The band’s name recalls the classic rock n’ roll color scheme sported by their influences. It inevitably evokes images of the White Stripes and their candy-colored motif, and the garage rock/blues they favored. Their sound has expanded since then, but the roots are still there, under the surface. “When we picked the name, we were more bluesy,” says Wittig. “We’ve kept the name as a reminder of how we started.”

When the Burning Peppermints take the stage, they want you to be excited as they are. Those are high standards. The music adamantly demands head-banging and foot-stomping, and the grooves are easy to fall into. They’ll stand on the drum kit. They’ll leap and bound. “The performance matters,” says Wittig. “It’s a party going on up on stage.”

The guys started out as snappy dressers: matching ties, maybe a suit. The most fun you could have in business-casual. After going mod for a season, the band now takes the stage in blazing neons, an assault on the eyes. Their visual performance goes far beyond matching uniforms, though. Shows often feature a narrative element, with hazmat crews, executions, and mad scientists popping up throughout the set.

From the moment the music starts, The Burning Peppermints careen through their set like a juggernaut. They’re a tightly-honed group, which allows them to play amazingly loose. They lean into the wind as the tempo gradually increases, like the whole thing could come apart.

Their aggressive guitars and shady themes come together like a frantic monster mash. “The older stuff had ghosts, campy horror,” says Wittig. “It feels like a grown up Charlie Brown Halloween.” Lyrics typically take a backseat to the music, which is fine. It’s fun to pick out references to creepy creatures like Grendel, or even a fantasy imagining of the Magic City, but the main attraction is the teeth-rattling groove.

“Scooby Doo” starts off with an eerie riff, pours on some bass, then the distant vocals seep in.
Heavy, even a tad menacing, the song’s groove piles on layers until crashing into the overdriven chorus. The guitar breaks are controlled chaos, rough around the edges and confidently slipshod. Au naturel and better for it.

Crowd favorites like “Ned Schneebly” put the band’s instrumentality right up front. It’s a manic jam with a few chanted lines thrown in. There’s a dynamic ebb and flow to the new tunes, as surf rock waves surge and recede, building tension in the lulls. 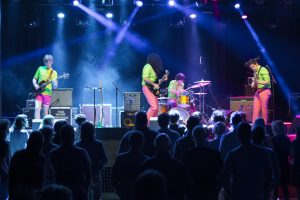 The Burning Peppermints have recently devoted some serious time to playing live around Birmingham. As the city proves a rekindled interest in rock music, they’ve found themselves playing to bigger crowds than ever before. Wittig recalls when that wasn’t the case, however. “Before the band, I played some open mics and wondered about rock’s place in the scene,” he says. “Then I saw bands like The Dirty Lungs and was really encouraged to see the scene grow.”

And there’s plenty of potential here. Venues will open their stages to rock musicians as long as Birmingham wants to hear them. “I’d love to see more support for the rock music we have in town now,” says Wittig. “Don’t take it for granted. If you want more, you’ve got to support what you already have.”