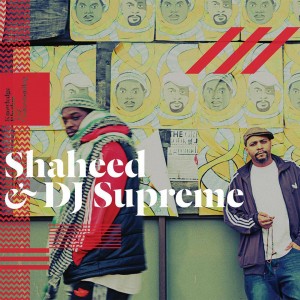 The sound is a call back to old school boom bap. Shaheed delivers his lines with bravado, and his lyrics often break from the current stream of radio hip hop, inspiring a positive attitude rather than inciting anger. Supreme’s dynamic production compliments and influences the MC’s attitude and always provides a catchy beat. His clever use of samples, fills, and his 808 drum machine make for a diverse musical foundation. Mixing came courtesy of Grammy award winning sound engineer Darrell Thorp. The contribution out of Thorp’s L.A. studio led to an amazingly precise and balanced audio mix.

The album kicks off with a ringing note and horn loop. The first track, “Right Now” begins with 20 seconds of hype talk from Shaheed and Supreme before diving into the hook. Supreme quickly establishes an appreciation for retro accents, as horns and strings here and throughout the album grace Knowledge with hints of soul and motown. “The Best Is Yet To Come” features sweet sax lines as well. Piano accents give the song tranquility, floating lightly over the beat.

Positivity permeates the album’s lyrics, with thoughts on aspirations, spirituality, and life. The superficiality of many modern hip hop acts doesn’t find a home on Knowledge. Like their Comm Vess label mates, The Green Seed, Shaheed & DJ Supreme are fully aware of the impact hip hop lyrics can have on their audience, and use their skills to enrich and inform.

Knowledge demonstrates the group’s scholarly genre awareness. “Take It Back” touts their efforts to keep hip hop near its roots, drawing it away from the negative influences of the music industry. “Champions of Truth” slips in a jab at reliance on autotune and dance songs. Some standard hip hop conventions are present, including hype-up intros, featured artists, and shout-outs a plenty. At first glance, “Saliva” could pass as a typical club track. It manages to fit in a few thoughts on the afterlife in the verses, however. That’s Shaheed’s persistent introspection- honesty and spirituality are central to his songwriting.

“Reality” calls for walking the straight and narrow road to achieve success, rather than cutting corners and putting up a false front. This will certainly be among the most memorable tracks from the album- from the sincere lyrics to the surrounding music, it’s masterfully infectious. Supreme fills in the blanks with appealing samples including a jangly retro lick that introduces the hook.

The album sees a number of guest appearances that bring in additional talent from near and far. “Boom It In Ya Jeep,” a tribute to the group’s influences, features Adib from Unseen Ummah and R-Tist from The Green Seed. Akil, the MC from Jurassic 5, lends his own rhymes to “Champions Of Truth.” For the final track, Angela King sings on the chorus of “Keep Climbing.”