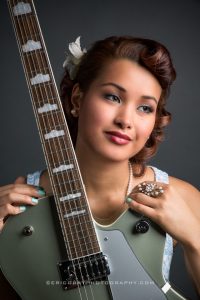 “If you asked little me what I wanted to be when I grew up, I would have told you ‘I want to be a singer!’” says singer/songwriter Raquel Lily. “Singing has always been a part of me. I guess you can say that I decided to do music instead of living a ‘normal’ life.” Raquel Lily has always felt a gravitation towards the spotlight, and between her powerhouse voice, electric stage presence, and deeply beautiful lyrics, it seems she has chosen just the right career path.

Born in the Philippines and raised in New York, Lily’s life has been baptized with a hodgepodge of musical inﬂuences, from her parents’ appreciation of jazz in her childhood, to her introduction to the Beatles when she was only 9, her teenage infatuation with punk bands like the Ramones, and Bad Religion, and ﬁnally her exposure to pop stars such as Lady Gaga, Adele and Jason Mraz when she was 17.  Her immensely diverse and deeply impactful infatuation with music has shaped her into the thoughtful and methodical musician she is today.

But of course her musical inﬂuences are not the only contributing factor to Lily’s musical success. She’s worked tirelessly to gain every ounce of credit she’s received. From her humble beginnings of playing free shows and open mic nights, Raquel has proved that her love of music is nothing short of dedication. “I played everywhere,” she states, “slapping my name on some bill, you name it, I did it. All the while, I balanced my full time job, my personal life, and music.  It is a lot of hard work and perseverance but It’s what I love to do.”

At times in her life she even admits she contemplated switching career paths. “After college, I told myself that I’d give myself a year to pursue music until I live a normal life and go to medical school,” Lily recalls. “For a while, I pursued medicine and had the intention of becoming a doctor. It gave me perspective and I realized I didn’t want to do any of that for the rest of my life.  It made me realize that music is something I need to do.” With her mind made up, Lily has since climbed the music ladder into becoming a bona ﬁde female powerhouse, just like the people who inspire her most.

What sets Lily apart from many competing pop singers on the scene now is her intimate connection with every aspect of her music. From lyrics to music to producing to editing, Lily herself is the sole face behind it all. “I always hope to convey the emotions I was feeling at the time when I wrote the song,” she says. “Of course, every time I sing these songs, I have a deep connection with them because most times, my songs are about things I’ve actually been through personally. Creativity, for me, comes very spontaneously. My ideas come to me almost whimsically. I mean every word.”

While her lyrics deal greatly with personal stories, her music and melodies convey a spirit of delight and energy. Her songs are entirely infectious. And this contagious charisma carries over into her live performances with graceful ease. It is impossible to keep from clapping or stomping along to the upbeat, zealous songs that Raquel Lily and her band pour their hearts into on stage.  Lily’s pure joy and adoration for her craft radiate as she captivates her audience with her life’s work.

From her stage presence to her composition, Lily demonstrates a knack for refreshing an oldies style, with hints of ‘50s and ‘60s love songs present throughout her set. Everything about “Baby I’m Yours” -the rhythm, backing vocals, and affectionate lyrics- is faithfully doo-wop. “Robbing and Romancing” tells the story of two lovers who get their kicks by knocking over banks. The Bonny and Clyde style heists are delivered with a spirit of abandon. The tempo mellows and adopts a tropical feel as they escape to some exotic locale.

While the style of days gone by are prevalent in her music, Lily isn’t simply a reprint of the oldies. Raquel’s lead vocals fit the format well, but she takes an occasional tonal detour suggestive of modern pop vocalists. She’d be in good company with top-40 belters like Katy Perry.

If not for her catchy, beautifully written songs and her hypnotizing stage presence, then what is it that makes Raquel Lily an artist to watch for?  “I’m real. I’m genuine. I work hard. I don’t feel entitled, or expect anything to be handed to me. I’m not some manufactured, mom-and-dad-have-money-and-bought-me-a-guitar-and-voice-lessons, singer songwriter. I take a lot of pride in what I do because I know that I have achieved it for myself. I write all of my own songs. I mean every word. I produce all of my own videos. I edit everything myself.  Everything that I have ever put out there has been done by me. I am extremely hands on in what I do and I don’t like to rely on others if I feel like I can do it.”

She also produces, records, and engineers her own music. “I don’t think you can get any closer than that to the project, besides writing the song.”