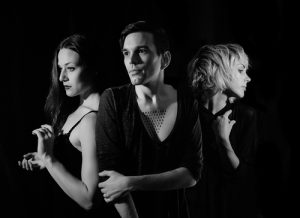 Part noise pop, part performance art–A Place Both Wonderful and Strange are definitely both. Inspired by the films of David Lynch, they were made Lynch official when commissioned by the David Lynch Foundation to make music for one of their events. But the dark energies of Lynchland and broader esoterica are not just a put-on for this group, who understand themselves to be making real, metaphysical music.

MCB: First of all, on your Facebook page there is a meme of what seems to be David Lynch hanging out at Panda Express while Bono is behind the counter. And I just can’t do this interview without asking about this image.

APBWS: We found this old photograph of our friend David hanging out with his friend at the mall and we wanted to share it.

MCB: So around 2009 or so there was this thing with dark electronic music and EPs with Laura Palmer on the cover and stuff like this. A genre, apparently, called witch house. Your music–which has been called “occult dance music”–plays with similar signifiers. Is there any particular way you would distinguish what you do from that scene/genre/movement?

APBWS: Honestly, a lot of that stuff–SALEM, the Aural Sects records stuff, early TRI ANGLE records, are really influential to this. But also this project has evolved from sort of a more blatantly “witch house” lean into something we’re using to both process and broadcast our feelings on occultism and emotional spirituality in general. I think the lean into Twin Peaks for the early Witch House scene was spot on the nose, because in a lot of ways, for those kids in the midwest, David Lynch is (as our friend/ tour manager Stef has said) the ultimate documentarian.

MCB: I take it you’re all big David Lynch fans (I am too). Are there ways you find his films/shows particularly inspirational? What about the way he describes his own creative process?

APBWS: Lynch has the unflinching ability to show the warts-and-all sides of a story in both horror and beauty. That’s something we explicitly tried to capture on the new album.

MCB: Related to the last question, you’ve done some work with the David Lynch Foundation. Are you practitioners of TM?

APBWS: Neither of us are, though we both practice mental, physical and spiritual wellness.

MCB: Today with musicians not making most of their money from their recordings (though maybe this could change) what do you try to do for your live shows to make them special and distinct?

APBWS: Performance is a huge part of our band, our live shows visual elements, occasionally dancers/strippers, we try to create a live wire environment that walks the line between cathartic and anxiety-inducing.

MCB: I’m sure you’re watching the new Twin Peaks. Some people are adamant that it’s a step down from the old show. How do you all feel?

APBWS: Russ wrote an article for TV Guide a few years ago saying that he didn’t want Twin Peaks to come back because there was absolutely no way David Lynch would be allowed to do exactly what he is doing right now. Russ was very wrong. We love it. Dougie Jones for president.

APBWS will perform at The Nick tonight at 10 p.m. They will be joined by The Murder of Jane Crow and Jacquie Cotillard. The Nick is located at 2514 10th Ave S, Birmingham, AL 35205.