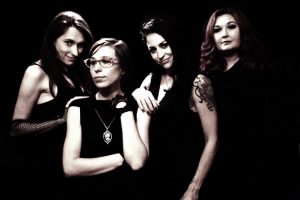 The Murder of Jane Crow is an ethereal-sounding band that mixes mystique and folksy piano to create a unique style, hard to put in any one genre. They pronounce a dark/gypsy aesthetic in their music, which contributes to a lively and fun experience.

The band explains that the reason for their dark/gypsy aesthetic theme was that singer Jane Crow was simply born that way and her band simply had to follow in that vein. This epitomizes the band’s aura, that the lead singer’s dark side colours the band’s image. The band’s inherent strangeness is up front with the pun on “murder of the crows,” as they feel it sounds a “like a long-forgotten Edgar Allen Poe story.”

The Murder of Jane Crow pride themselves on their gigs being performances in themselves, with their gypsy stage show vibe. They will mix with the crowd in their signature plague masks preparing for their spectacular live performance.

Their dress and show are what particularly strikes you about the band. Their costumes make you feel that you stepped into a time machine and headed back a few centuries, and their circus and almost-Moulin Rouge glamour create a powerful but also Gothic nature due to their macabre make-up. To see this band perform live is to understand the true magic they possess, as their unique sound is one thing, but to see even the music video of “My Lobotomy” is to be transformed into a world of mystique, glamour, and Gothic horror.

McFarland explains that, “Everyone in The Murder is a lifelong musician. We’ve been actively involved in the Birmingham music scene for years. We’ve known of and been fans of one another for some time. We invariably found our way to each other when Jane Crow started bringing together a musical dream team to support her original songs. We have been making beautiful music together ever since.” Their long time Magic City association shows in their gypsy gang appearance during their music video of “My Lobotomy.”

For instance, Crow, lead vocalist, has been a singer and songwriter all her life and is self taught on the piano. However, as Crow explains, she began “composing voraciously…but often felt my solo compositions were missing something, especially in live execution. [However] now I have the band of my dreams, and together, we have created a sum that is far greater than any of its single parts.”

Mollie plays viola, violin, and sings soprano, which she has been doing since she was a youngster. She considers the eccentric viola as an extension of herself. However, she plays the others “just for the sake of convenience and necessity.” These descriptions express the musical authenticity of the band, which no one would dare call “machine.”

The band’s inspiration is drawn from quite the concoction, including “romantic era art, music and literature, mythology, the supernatural, the moon, mysticism, water, beauty, horror, love, lust, pain, grief, anxiety, honesty, sadness, strength, unyielding spirit, whiskey, and laughter in abundance.” This kaleidoscope of inspiration makes sense when viewing the bands mish-mashed appearance, that although makes them appear to have been hit by a Halloween costume tornado, demonstrates their eclectic make-up.

The gypsy sound is somewhat inspired by Andrew Bird. McFarland adores him and loves “the gypsy sounds of Golgol Bordello. I love a band that uses strings well and wisely. There isn’t a lot that gets my attention lately,” but as she elaborates, “Kishi Bashi writes lovely songs. My moods change fast and I don’t love any band unconditionally. I’ve been inspired by rock music and I was raised playing classical music and modern compositions on classical instruments.” 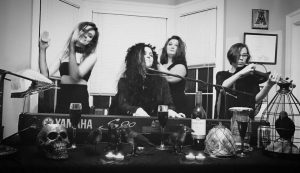 The band’s darkness is echoed in the song names and their inspiration. Crow admits, “My songs always come from a place of truth and honesty; I can only write what I know and what I feel. I follow my inspiration wherever it leads when I am composing.” Further discussing some examples, Crow states, “I have a song called ‘My Lobotomy,’ which I wrote after I saw the movie Idiocracy and was frustrated with the inherent dumbing-down of civilization. I composed ‘Paralyzed,’ our new single, as I struggled to cope with the seemingly endless war, crime, and pointless death in this world.”

This inward anger and horror at the world is reflected in the darkness her songs emanate. Crow explains that “these are just two examples, but every song has a different motivation based on where my head and heart were at the time I sat down at my piano.”

The Murder of Jane Crow are about to release a new EP and a music video. They are also beginning to play shows outside of Birmingham in surroundings cities and states as a way of sharing their music with a wider audience.