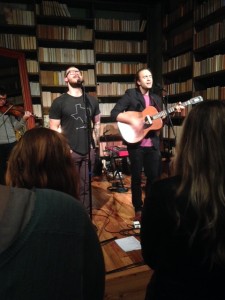 Standing as one of Birmingham’s most unique venues, Sound & Page celebrated their grand re-opening on March 11th with the soul-soothing music of Penny and Sparrow. The event was sold out, and fervent audience members were packed from the back wall to the foot of the stage. Concerts have been put on hold at Sound & Page since November of 2014, due to renovations and a building out of the space.

Doors opened at 7:30, and upon my arrival the room was beginning to fill with listeners embracing the Sound & Page BYOB policy. Audience members stood in circles chatting with friends old and new, passing the thirty minutes before the music began in casual conversation. Conversation and drinks are in large supply before and after the concert, but when the music starts, it’s time to listen.

This venue was created with one purpose: to bring artists into a room full of people that are willing to set aside distractions and appreciate music. The noticeably small area of Sound & Page allows for an intimate connection between the audience and the artist, and ultimately, between the people and the music itself. I spoke to a few audience members that had never been to the venue before, and the smallness of the space surprised them. But by the end, they were well aware of the necessity and effect of the venue’s size and how different it felt than attending a concert at larger venues such as Iron City or WorkPlay.

The physical appearance of Sound & Page underwent a few minor changes during their temporary closure. One of the first elements that attendees will notice is the vast collection of books that line the walls, which has been expanded to cover even more wall space. These antiquated books are stored on sturdy wooden shelves that stretch from floor to ceiling and give the room a cozy vintage feel. This is where the venue’s name stems from: the ongoing concert provides the “Sound” and the overflow of books provides the “Page.” Along with the countless books, you can find quirky decorations such as stuffed crows and animal skulls, accordions on pulleys and even a moose head. For those who like spending time exploring antique shops, this décor will make you feel right at home.

The show started a few minutes after eight o’clock, ignoring the commonalities of an
opener and instead jumping straight into the music of Penny and Sparrow. Penny and Sparrow is a singer/songwriter band from Austin, Texas. Their music draws from the acoustic styles of Bon Iver and City and Colour, combined with the raw, romantic lyrics of The Swell Season.

The show provided a balance of songs from the band’s newest record, “Struggle Pretty,” as well as favorites from their previous albums “Creature” and “Tenboom.” True to their style, the duo brought mellow acoustic tones that captivated listeners and enhanced the peaceful aura of the room. Vocalists Andy Baxter and Kyle Jahnke were accompanied by violinist Alex Page and electric guitarist Chris Jacobie. This is Alex and Chris’ first time on tour with the band, though they have both played major parts in the production of previous records.

The audience was mesmerized by lead singer Andy Baxter’s acapella vocals halfway through the song “Fantine.” The absence of supporting instruments forced the crowd to focus solely on the meaning of the lyrics. As usual, Kyle’s high harmonies provided a mellifluous buzz to accompany the belt of Andy’s vocals. The duo’s sound is consistently engaging and haunting, mixed with a rough edge that allows the listener to hear something new each time.

The duo performed crowd favorites such as “Creature” and “Brothers.” There was a beautiful moment during “Brothers” as the audience began to sing along, almost in a whisper, forming a divine choir to accompany the musicians. The flawless harmonies and soulful countenance of the musicians spilled over into the crowd, making them feel the raw emotions embedded in the music.

Baxter opened up before performing “Rattle,” one of the band’s most honest songs. “It’s cathartic. Like opening up a really personal letter and having it read out loud,” he said. The song’s elegant violin solo, delivered by Page, echoed one last note before Baxter’s voice took over and sang acapella until the end. This song embodies the band’s beliefs in embracing the beautiful yet messy aspects of life.

Not everything goes according to plan during performances, but Kyle and Andy handled the bumps with ease. When a crucial string broke on Kyle’s guitar, Audience members let out a grunt of disappointment, throwing a kink into the next song choice. Nevertheless, the band carried on in a different key, delivering the beloved “Just and Just As” just as wonderfully as if all strings had been usable.

During the show, laughter was not in short supply. Kyle and Andy’s sense of humor resonated with listeners and cut the tension between songs. At one point, the duo had their listeners in stitches as they introduced a “French song” that was supposedly very romantic when translated into English. The audience stood eagerly waiting to hear the beautiful French lyrics, only to be met with a cover of Usher’s “Nice and Slow” instead.

The band also included a few songs from their upcoming album, which they plan to start recording very soon in Florence, Alabama. These new songs are titled “Makeshift” and “Finery.” Both are composed of the band’s signature harmonies and acapella breaks. This revelation left the audience spellbound in hopeful anticipation, with only a taste of the much-anticipated new record.

The show began and ended with flawless harmonies and honest lyrics. The intimate and casual setting allowed audience members to converse with the band after the show and have another drink after experiencing a new bit of magic from the heart of The Magic City.