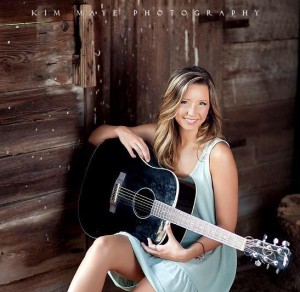 From the Flora-Bama to Avondale Brewing, singer/songwriter Megan Kane has quickly made a name for herself across the state. At age 17, she’s already jump-started a musical career with charming live performances and a 2015 EP, Final Address.

Kane recently performed at the Southbound Music Festival. “This show was amazing,” she says. “I had everyone that I love and care about come to support me, and honestly having them there makes everything I do worth it. When I look into the crowd and see all the people who have been there from the beginning, it just reminds me, every time, that this is why I love doing what I do.”

Kane started singing at the age of 9, began playing guitar and writing at 14, and now at 17 performs as much as she can. “Music is something that I always loved” she says, “and is something I hope to continue to be doing for a very long time.” She honed her skills in local events like WorkPlay’s singer/songwriter nights, and has since become a regular act at venues like Rogue Tavern.

Kane’s influences draw from years of country classics. Her favorite song to cover is “Folsom Prison” by the man in black, Johnny Cash. “I just love old music,” says Kane, “How back then everyone worked through blood and tears to get where they are. And I admire that these days more than ever.”

Kane has just released a new single “Final Address.” “It is a story about an old man that I had seen passing a graveyard on my way to school,” she says. Kane had planned on writing the song about this old man for over a process of three months. When she went to Nashville and met with a co-writer friend of hers, they ended up writing a beautiful love story ballad. “About a month after the song was written I ended up meeting the man at the graveyard,” she says. “The story that I had written was actually his real life story. Now he is like a grandfather to me and he comes to most of my shows. My most recent EP is dedicated to him.”

If the chance arises for you to see Megan perform, the show will contain “a little bit of Johnny Cash, some sweet and very sassy originals, a whole lot of energy,” says Kane. “And one heck of a good time!”