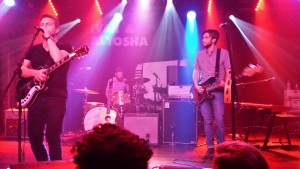 Four mics evenly spaced. Four dudes standing in their first­-chord microphone hunch. Four bass and guitar necks lined up in parallel angles. And only one large beard. This image marks
Saturn’s first Wednesday concert in June, as Ivan & Alyosha tuned up for the first breath of their rocking set. After four nights in a row in different southern cities, the band launched to Saturn’s stage.

But no amount of rest or Stumptown Coffee could have fueled the energy Ivan & Alyosha
brought to the intimate night, as the personality and camaraderie spilled into the audience while the Seattle band grinned through their new album. It’s All Just Pretend was released this year, and the mix of folk, rock, and jazzy blues ran the set with a soulful tear­jerker (“Tears in Your Eyes”) and encouraging lyrics in between.

Singers Tim and Pete Wilson are brothers by blood, but the humor and interaction on stage
betrayed the brotherhood of the whole group. “Some bands don’t like each other!” Pete remarked afterward as he talked about touring. “It is hard some days. But we’re a family.” Jumping on amps, crossing cords and butt­-bumping on stage proved the truth of Pete’s comment and made the band a blast to watch. Clapping along was hardly optional.

The band’s most faithful groupies are a middle-­age couple who had followed them from
Nashville to Atlanta to Birmingham for the four nights prior, and Janet couldn’t help showing me her Kodak moments. There the band stands after Janet and her husband had taken them to dinner, and there is a shot of the Masquerade where they had played on Tim Kim’s birthday. “Some bands are worth traveling for,” Janet said “and I told them not to eat barbecue before the show!”

But the band rounded out an incredible set nonetheless, matching obvious enjoyment with
unified musicianship and with a consistent style over the mix of genres represented. Drummer Cole Mauro fit right in to the mix after only playing with Ivan & Alyosha for a few months. Somehow, a large trendy beard is only a new addition to the Ivan & Alyosha aesthetic.

Opener Kris Orlowski also rocked some trending facial hair, with a notable singer­/songwriter
mustache that the audience members complimented. His set included eyes-­closed, thoughtful
lyrics, and he balanced the more somber feel with witty audience interaction. Taking an
opportunity unique to a cozy Birmingham venue, Orlowski asked if he could play in the middle
of the room to a completely silent surrounding audience. And, of course, the Saturn townies
obliged. Standing in a circle to meet his eye contact, Orlowski hypnotized the audience with his
favorite song “Slide.” “Only once you give in and then you’re gone… It’s your life. It’s your life,” he sang. And we believed him.

Both bands made much of the hospitable environment after the show, coming out from the merch table and talking with fans. Ivan & Alyosha members talked about touring with Colony House as if they had extended their own camaraderie to the Chapman brother’s band. Kris Orlowski handed out encouragement and free stickers. And Janet gave out hugs.

“You make it easy to love you,” the artists sang that night. And we believed that too.