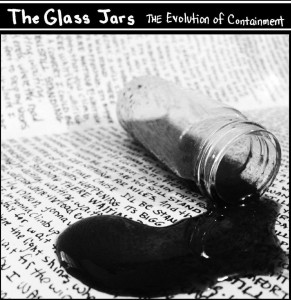 The Glass Jars have crafted a unique blend of rock, jazz, and classical sounds into their first full album, Evolution of Containment. After changing their lineup and their name (formerly Loup-Garou), the band has documented this stage in their evolution with nine tracks of intriguing melodies and smoldering vocals.

The band’s eponymous track “Glass Jars” starts as a slow simmer, then ups the tempo and breaks into a bright blaze, introducing the album’s recurring jazzy rhythms. The song and eventual band name occurred to songwriter Shawna Ross several years ago as she began to incorporate imagery into her writing. “The glass jar was a perfect representation for the place I kept my thoughts, fears, regrets, habits, etc.,” she says. “Throughout the years, the theme repeated and I found it impossible to write a song about any subject without some element of containment. The forms just evolved over time.”

Ross specializes in smooth, seductive vocals- the sort that would set wolves to howling in the old Tex Avery shows (Her live sets include a killer version of “Why Don’t You Do Right?” a la Jessica Rabbit). In “Standing,” she sustains a somber tone with slight reverb over minimal guitar and jazz brushes. As the full band kicks in, she reaches to the higher side of her range without losing any of her voice’s depth. Ross’ midrange is well suited to both jazz and blues, and her melodies are resourceful enough to compliment the band’s creative progressions.

Tracks like “Desert” demonstrate the band’s aptitude for straightforward rock. “Navajo” contains just a hint of Pat Benatar in the verses. The record’s overarching sound, though, is much more complex. The Glass Jars have always favored a warm, jazz-influenced approach to song composition, and the addition of violist Mollie McFarland drastically alters the band’s character without dousing that heat.

McFarland’s viola changes the band’s chemistry at the atomic level. While The Glass Jars retain much of the jazz warmth from their Loup-Garou days, their string melodies are a shade darker than the old sax lines. Her moonlit accents in “Dirty” and solos in tracks like “Bluebird” inject an air of intrigue around Ross’ lyrics and gracefully weave into the rhythm. McFarland also provides backing vocals on multiple tracks.

While Ross’ strumming provides steady pace, the core of the group’s rhythm is formed by Jeremy Tidmore’s bass and Matthew Herbert’s percussion. Tidmore’s classical and jazz influences translate to charismatic chord progressions and catchy bass lines. The jazz swing really comes out in “Bluebird.” It’s an energetic highpoint on the album and it’s apparent from their playing that the band knows it. Typically a very discerning drummer, Herbert takes the track as his golden opportunity to cut loose.

If the album needed a hook, it certainly has one in “Cocoa Butter.” From the provocative title to the sultry delivery, the confessional song embodies The Glass Jars’ style perfectly. Thoughts of desire and restraint are addressed through moody vocals and a catchy chorus. It also features Herbert pulling double duty drums on piano.

Evolution of Containment will release on iTunes, Amazon, and select local and regional retail outlets on March 8. The album is now available for preorder at theglassjars.net. Preorders made before March 1 will also be sent a free download of the album within 24 hours.