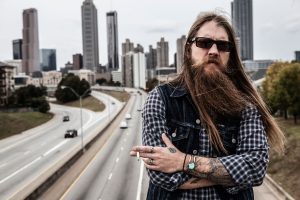 Hear the words “touring musician” and you likely picture something like Reverend Hylton. Long windswept hair, well-worn guitar case, and an Old-Testament beard. Originating from Atlanta, Hylton is the consummate traveling artist, racking up a solid 200 gigs per year. His latest tour brings his experiential storytelling to The Nick on April 22.

Hylton spent his 20s traveling the country with friends, a relentless pursuit of happiness that took them through good times and rough patches. “We’d have fun, get into trouble, go on to the next town,” he says. Eventually, however, the trouble took over and Hylton grappled with addiction through many of his wandering days.

The troubles are right up front in his lyrics. Pain, loss, and the desperate need for a way out. Now seven years sober, Hylton can revisit those songs with a lighter heart. “The music used to be a relief from what I was going through,” he says. “Now it’s a reminder of where I’ve been and how I made it out.”

The songwriting draws from his highs and lows along the way. “She Never Said Goodbye” begins as with the end of a relationship, and as the verses progress, he assumes responsibility for the conflict.

Hylton’s sound is pure Americana. Melodies call back to folk standards like “River Jordan,” and there’s a hint of early Dylan in the vocals. Songs like the forlorn “Stubborn Nail” capture the despair he experienced in the depths of addiction.  “It became a battle,” he says. “Everywhere I went, I’d get knocked down.”

While the spiral days of addiction are well behind him, Hylton continues life on the road, touring the U.S. with a clear head. “It’s exactly what I want to do,” he says. “I get to see everything from inner cities to mountain peaks.”

The seeds of wanderlust were planted early. Hylton recalls exploring the Vance National forest in Idaho with family, falling in love with the sense of adventure and discovery. “From then on, I wanted to see all that I could,” he says. “I’ve been all over, from California to the Florida Keys, living by the seat of my pants the whole way.”

Hylton’s love of music began at an early age as well. As a teenager, Hylton had a tendency to seek out trouble. To keep him on the straight and narrow, his mother would send him to his grandfather, a judge with a penchant for bluegrass. “We’d spend the day working on his boat, making chairs, or some handiwork,” says Hylton. “At night, he’d bring out his banjo and we’d play old standards, Merle Haggard, that sort of thing.”

Throw in an album, several seasons of gigging with bands like The Devil’s Hands, and incubation in Atlanta’s impressive songwriter scene (think Eddie’s Attic), and you’ll find a near-endless cache of inspiration. Expect to hear it take shape soon, as Reverend Hylton is currently working on a new record.

Of course, you don’t have to wait for the album to drop to hear his new material. You’ll have a chance to hear it live right here in Birmingham. After logging countless hours in bars across the country, Hylton should feel right at home on The Nick’s sticker-laden stage. “I love venues like The Nick,” he says. “I cut my teeth in old dives like that.”

The show starts at 10 p.m. Reverend Hylton will be joined by Greco and Eight Feet Thick. The Nick is located at 2514 10th Avenue South, Birmingham, AL 35205.