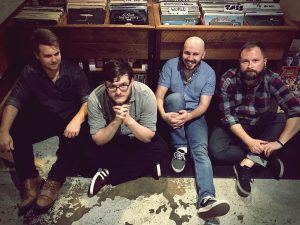 Mississippi guitar rock without blues roots, cover art with the conceptual resonance of a classic concept album, and likeable melodic rock without the love songs… these surprises all serve to distinguish Empty Atlas from any preconception you might hazard from if supplied with only the mere facts of their origin. Their full length debut, Hestia–which balances deep melancholy overtones with catchy riffs and bright energy–is as engaging as it is wrenching and meditative. I talked with their lead singer and Founding Member, Micah Smith, ahead of their show this Saturday at The Nick.

So you guys are based in Jackson–were you also born and raised?

We’re actually from all over–I’m originally from Omaha, Nebraska, and Baton Rouge, Louisiana, and Brennan is from Franklin, Tennessee, for instance–but we’ve all lived in Mississippi for most of our lives. We all met around Jackson through playing with different projects, and we’re still based there.

On your website, there’s a description of the band which emphasizes your relationship to the tradition of Mississippi storytelling. Are there particular Mississippi storytellers–whether working in music or not–that you see yourself blazing a trail, or sharing a history with?

I almost hate to say a specific writer because Mississippi and especially Jackson have this crazy, incredible history of great writers that I don’t line up with. I think it’s more that growing up in Mississippi really gave me an intense appreciation for writing and what it can be to people. It’s something I try to be mindful of with all of our song lyrics – just trying to present a narrative that people can latch onto and gain some meaning from, even if it’s a little more abstract.

Beyond Mississippi, are there any artists–whether music or not–which influenced what you were going for on this record?

It’s funny because the artists who inspire us aren’t necessarily ones that I think we sound like. I know I’ve been a big fan of the bands Copeland and All Get Out for a long time, and those two sort of reflect on the melodies and emotion at times, I think. I like that there isn’t a specific artist’s sound or style that we’re entirely chained to, though. It sort of gives us permission to make some songs that are pretty diverse but still fit, to me at least.

The album has been described as being about different ways of thinking about “home” as a concept, and is named after the Greek goddess of domesticity, home, and family. Where did that thematic focus come from?

My wife Jeana and I were moving into our home when I first started writing this material, and I would have conversations with people that made me realize everyone has a very different perspective on what home and family look like. So each song kind of presents a different angle on people’s relationships with home and with others, but none are romantic songs. And in terms of Hestia, she’s the Greek goddess of the hearth and home. She’s the one you’d pray to for things like a happy home life, but she is very much a minor god. I liked the idea of this god that’s over something as important as your family but isn’t seen as especially powerful or revered. 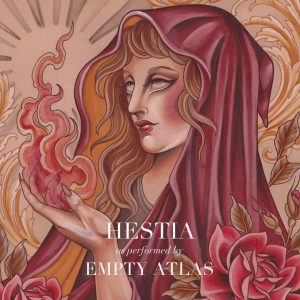 The album artwork is striking. Who was the artist/what’s it from?

I love the artwork! It’s my favorite album art, and we’re lucky that it’s on our album. A friend of ours, Azha Sanders, is a tattoo artist on the Gulf Coast, and she was kind enough to take just my general premise and create something awesome and original, but also reminiscent of classical paintings of the Virgin Mary.

Since the recording of the album, you’ve added a few more members to your lineup. Do you think the new lineup will add something different to the live shows than what we can hear on the record, or are you aiming for fidelity to that for now?

Even before recording Hestia, the friends I had been playing with–Chris Graham, Sanders Reid and Jacob Walker–were just really busy with life and unable to perform out of town much, but they were all awesome enough to play on the album with me. Our current bassist, Alex Ingram, was actually my first-ever guitarist who moved back to Jackson from Nashville recently, and then our current guitarist Brennan White and drummer Bobby Hansford are the other guys in the current lineup.

The great thing with these guys is hearing the songs take form in new ways. They’re all incredibly talented, and we’ve been having fun playing new arrangements of the songs on occasion and letting them each bring their own style with it. With any music, to an extent, when you bring together musicians who are all artists and songwriters and have a defined style to their playing, it’s cool to see what comes out of that combination. For instance, with the last song, “Masterpiece,” it has more of a groove and full-band vibe than what’s on the album, and it has this really big feel to it. We’re definitely not messing with the things that people like about the songs, but hopefully people will feel like they’re hearing something new and living instead of a reproduction of the album.