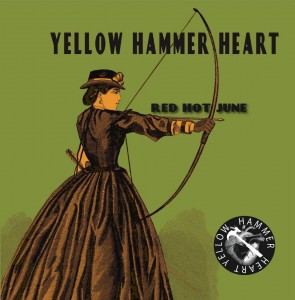 Yellow Hammer Heart’s summer release, Red Hot June, marks their first full-length studio effort. The record is a collection from the diverse setlist that the rock trio has accumulated since their inception two years ago.  Adrienne and Tyler Applegate arrived in Birmingham in 2011. They joined with Adrienne’s sister, Angela Senicz to form a three part garage act that has absorbed the Americana that permeates the city. The new group applies this combination in surprising ways: On the album, they cleverly breathe fire into a centuries old classic, and can wax sentimental without losing that rock and roll edge.

Adrienne handles the band’s lead vocals and guitar, while Tyler mans the drum set. Adrienne’s voice carries hints of her Southern surroundings, as does her songwriting. She questions why relationships go wrong, and may tease about mistakes made along the way. Tyler’s percussion varies per song, conscious of what’s called for. He comes alive on the up-tempo numbers, and a lot can happen between tom fills. Angela plays keys and performs additional vocal duties. She sings harmony that swoops high and low around the lead, and seems to step comfortably into a prominent position at times. The trio recorded their inaugural album at Birmingham’s Magnetic Audio, with sound expert Emanual Ellinas at the mixer. The guitar fuzz heard throughout the album comes courtesy of Sitori Sonics, Ellinas’ own effects pedal project.

The opening track, “Arrow,” could easily function as an acoustic number, with wistful memories and folk melody. However, the band spikes the song with ample symbol crashes and thick overdrive on Adrienne’s guitar. The rock and roll attitude settles in for good by the intro of the following track, “Cannon.” Adrienne keeps the overdrive dialed high, and Angela contributes both keyboard and the clack of spoons in addition to backing vocals. Tyler varies the drum accents for each verse while keeping the underlying beat steady.

Although guitar tones remain congruent throughout much of the album, technique can vary broadly from track to track. Red Hot June includes a range of musical styles in response to Adrienne’s songwriting. “Broke Your Heart” features the bouncing bass and adamant snare of a country-western sendoff. A low-gain guitar slips some twang around those distorted chords. “Take Me” resembles an updated doo-wop number, complete with crunchy chords and steady hi-hat. Angela’s harmony is tight, and Adrienne’s provoking refrain reaches high as the song plays out.

“Sweet” features a few interesting moments of woven melody. While many harmony singers tend to stay in the background, Adrienne and Angela boldly take parallel lead paths. Of course, the voices come together at each chorus, and the two singers share the spotlight throughout the song. The track is a testament to Emanual Ellinas’ mixing abilities, and the intertwining melodies make this one of the most infectious tracks on the record.

The album’s final track is a surprising adaptation of a 19th century traditional ballad. The band doesn’t bother unplugging for romanticism’s sake, and goes into “Lakes of Pontchartrain” in an unexpectedly natural rock fashion. While the tune has often received a maudlin recitation from artist to artist, Yellow Hammer Heart’s up-tempo performance gives the song a welcome breath of fresh air.

From the Americana fused into their garage methodology to the locally-tweaked distortion of their guitars, Yellow Hammer Heart’s first album bears many positive influences from their surrounding city. The voices are front and center, and the entire record floats on a cloud of guitar fuzz. Former Dear August members Adrienne and Tyler have adapted well since their jump to electric, and the addition of Angela’s voice and keys opens a wider map of musical avenues. The Americana/garage sound that the band has established on Red Hot June makes for a fun listen from start to finish, as they’ve effectively shown the versatility of those genres.

Red Hot June is now available on iTunes and cdbaby.