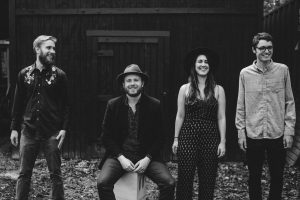 “When we’re barreling down the highway in the van after a great show, we feel like we’ve won the game of life,” says Luke Mitchell, lead vocals/guitar for The High Divers, “even if it’s just for a small moment.”

There is no recipe for success as a group of musicians. You can generally find a lot of the same traits in the musicians who attract a following and get a taste of the dream. It starts with an honest passion for your music and that first leap of faith to chase your dream of sharing your music with others.

Follow that up with commitment, a lot of hard work, and the gratitude that it takes to play your heart out at every show, and you have the making of something special. Listening to their first album, Riverlust, these traits radiate.

South Carolina’s The High Divers will bring their soulful Southern rock to The Nick on Thursday, March 9. It’s the kind of music that can get stuck in your head after the first listen, and it’s hard to resist feeling the rhythm from head to toe. Their first album has been praised as a must-have with every song distinctly reverberating The High Divers’ imprint.

Luke and Kevin Early (bass and backing vocals) have been playing music together since the ripe age of 14 when they played in a ‘60s and ‘70s cover band. Asked if he feels this bleeds into his music now, Luke says, “I think our overall knowledge of music of the past is something we’re pretty proud of. I know great music is still being made, but we have a real soft spot for the older stuff.  When people try to show me, say, Justin Bieber, I always want to ask them, ‘well have you heard this guy, Otis Redding sing?’ Not trying to be a snob or ‘stuck in the past,’ but those artists resonated on a whole different level.”

“There’s so much to unpack from those soul singers of back then,” Luke explains. “The range of human emotion can be felt in just a few lines. Nina Simone, James Brown, David Ruffin, those singers are devastating to me. Really blew my mind when I first heard them, in the best way possible. Those singers have always stayed in my mind.” You can hear this influence when the band comes together in songs like “Wild with You” and “Rising Waters.”

Luke took a leap of faith to make his dreams come true, moved to Charleston, formed the High Divers with Kevin, drummer Julius DeAngelis (who had been touring with a Southern rock band), and Mary Alice Connor who filled the need for keyboard and addition vocals. The newly formed High Divers immediately began record their first album, Riverlust.

Since then, the band has been hitting the road hard, gracing stages big and small and playing with groups including American Aquarium, Johnny Delaware, Futurebirds, and have a forthcoming gig with Birmingham’s own St. Paul and the Broken Bones. The road’s a tough life, but what Luke says keeps him going is “knowing what it feels like to work for something you don’t believe in or enjoy. We all believe in what we’re doing, and that energy keeps us going and grounded. We’re paying our dues and enjoying putting our time in on the road.”

The High Divers are no strangers to Birmingham. Luke has some fond memories from The Nick, and recalls the night he met a another musician and learned about the impact that music made on his life. “A guy with a mohawk showed up and just stood in front of me, staring at my guitar pedals,” he says. “We got to talking after the show, and he told us that almost six years to the day he had played at The Nick, and gotten in a fight with a band member, and decided he didn’t want to play music anymore.”

The musician’s wife encouraged him to press on, and he eventually joined a national touring act. “He was tearing up saying ‘I almost quit music, right here, but because of my wife I stuck with it, and now I can take care of my kids and not have to worry!’”

Their show on March 9 will showcase their Riverlust album, hopefully some new music from their record (due to be released July 28), some awesome hats, and undoubtedly a shameless plug to promote the hitching of band members Luke and Mary Alice.

The Nick is located at 2514 10th Avenue South, Birmingham, AL 35205. The High Divers will be joined by Frances & the Foundation and Lines In The Sky. The music starts at 10 p.m.