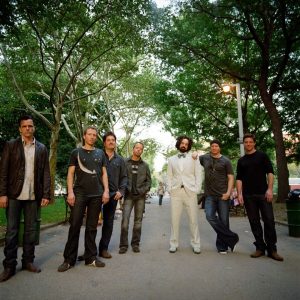 In 1993, Berkley, CA’s Counting Crows introduced us to Mr. Jones, Maria, Anna and the Rain King. After dominating radio and MTV throughout the 90s and resurging in the 2000s with songs like “Accidentally In Love” on the Shrek 2 soundtrack, Adam Duritz focused on bringing new bands like Augustana, Graham Colton and Good Old War into the public conscious as well as working with Ryan’s Smashing Life blog to produce the indie rock touring behemoth, The Outlaw Roadshow.

Counting Crows are touring with longtime friends and fellow 90s stalwarts, Matchbox Twenty, this fall. They are coming to Birmingham August 9th. We spoke with Duritz about Birmingham connections, the power of the internet music landscape and mental health issues for musicians.

Chris K Davidson: Counting Crows has a cool musical connection to Birmingham in that the guys from Remy Zero appeared in the video for “Hanginaround” from [1999’s] This Desert Life. How did that happen?

Adam Duritz: I met them one night at the Viper Room [in Los Angeles], much like I met Rob [Thomas of Matchbox Twenty]. They walked in and told me they had been signed and got a record deal. They were all living together in an apartment, and we struck up a friendship.

On one of our first trips to Birmingham, we were at a club in 1993. We were opening and we had finished soundcheck. There were all of these people playing pool, and we started talking to them. They all worked at a record store in Birmingham, and it turned out they had been playing the record [August and Everything After] over and over in the record store and telling everyone they should buy it. We were wondering why we had sold a bunch of records in Birmingham when we hadn’t sold any records anywhere. I think it was the Magic Platter. It was weird and kind of awesome to see all of these people there for us. It was one of the first towns where we had that kind of response.

Back to Remy Zero, around the time I met them, I had gotten a cottage and Cinjun [Tate, Remy Zero lead vocalist] was living with me for a while then and later too when we moved into the big house where we filmed the “Hanginaround” video a few years later. They were making Villa Elaine while we were making This Desert Life. When I met them, they had been demoing those songs, and they had just put out their first record.

CKD: And you both were signed to Geffen?

AD: I think they signed to Geffen after that first record. They have been on another label at first.

CKD: Counting Crows is touring with Matchbox Twenty, and it’s the 20th anniversary of their debut record. You had toured with Rob Thomas last year as well. Were you already planning this tour back then?

AD: We were trying to plan it. The funny thing was we had such a good time on that tour together last year. Rob and I became friends years and years ago, and I hadn’t seen him in a while. It was just like there had never been a day in between. It was the best time. We sat around a couple of times at dinner, just me and him secretly trying to figure out a way to tour together every year. We thought about making a festival and bringing out all of these indie bands, similar to the festival I run called The Outlaw Roadshow. We were brainstorming ways to do that because last year’s tour was so much fun.

We couldn’t figure it out though, and I didn’t think Matchbox was going out this summer, so I thought we weren’t going to be able to do it. We were almost settling on a different tour, and right before we started nailing that down, we got a call that Matchbox had changed their mind and wanted to tour with us, so I said okay. I felt like we owed it to Rob. It fell out of the sky, and we were pretty happy about that.

CKD: Rob was playing a lot of Matchbox songs on that tour last year, so to see him with the rest of the band is going to be great for a lot of fans who love both of your bands.

AD: That solo version of “3 A.M.” that he was playing last year was phenomenal. That version is so beautiful, it ruined the other version in my head. Just the other day, I was listening to Matchbox stuff, and I realized that “3 A.M.” was actually an up-tempo song. I had completely forgotten that their version was so different.

CKD: Counting Crows is a band that has used the internet to your advantage. There are even stories of you interacting with fans on the Counting Crows message boards and people didn’t believe it was you. Since you’ve seen both sides of the digital music landscape, how do you feel that helped your band and how do you think it’s helped more recent bands?

AD: There’s no doubt in my mind that the internet is a good thing for music. It may not be a good thing for making a lot of money. To be honest, half of our income is gone. I don’t know another industry that could survive losing half its income. There’s no real record income anymore. The hardest part about being a band before was the cost. It was impossible to record unless you had a studio. It was impossible to distribute your record because distribution was so expensive and it’s hard to print physical records and ship them out by truck to record stores all over the country. Now you have the ability to record on your computer and you have a million sites like Bandcamp where all you have to do is upload the music.

Back then, you had to be on a record label or else you may have been able to make one album at most. Now anyone can do it, which means there is ten million more times great music out there. It may be hard to get it to people and get everyone to recognize it, but that’s a problem for me and a few other bands. The truth is, for other bands, things are so much better because you can be a band for longer and get really good. I know bands from The Outlaw Roadshow who have never been signed, have never been discovered and have made five or six records. They have been together for a decade. They may never fully support themselves, but a band like Mean Creek made six or seven records and every one of them got better as they went along. They may have broken up now, but they have a decade of music that is there for us to discover. If it’s out there, people can find it.

There’s good and there’s bad. The bad thing is the internet can devalue music in some ways, but that’s been happening for all of time. We revere art after it’s made, but no one bought a painting by Van Gogh his entire life. It was kind of miserable for him. We just do that as humanity. Now we’re saying that tires are worth money, apps and phone are worth money, but we think we deserve art for free. But that’s been going for hundreds or thousands of years, so what are you going to do about that?

The ability to talk directly to your fans through social media is incredible and you don’t have to go through the middle man of the press and TV. That’s not a bad thing. It can’t be. On the other hand, there are things about Twitter and Snapchat and Instagram that are bad, especially all of the trolling. You can’t blame the internet for humans being humans. We’ve been doing stuff like that since we’ve been gathering together and slaughtering each. I’m not going to blame Twitter for the facts that people are douchebags sometimes. Like any other tool, you can use social media for good or for bad.

Mostly, the internet has been an amazing thing. The downside for music has nothing to do with the internet or social media. The downside has to do with people being people and deciding they deserve things for free or deciding to s*** all over each other. But the tool itself is incredible. It enables everyone in the world to communicate with everyone else in the world for free, and that can’t be a bad thing. You can pass music around, you can record music, you can see art, you can meet people and you can fall in love. There are a million ways that it enables us to do things. I do wish I had that other half of my income back, but what can you do?

CKD: Is there anything on the horizon as far as new Counting Crows material?

AD: I’m writing right now. I’ve got some cool pieces, and I really like them. Just gotta do more. I had a lazy first half of the year, but it’s coming along.

CKD: What are three Counting Crows songs that you hope form the legacy of the band?

CKD: You’ve been open about your mental health struggles over the years. How do you think that conversation has progressed over the years as far as resources for other musicians who struggle with those issues?

AD: I worry about that. Having been successful, I have the means to both take care of myself when I have trouble functioning and to get myself help. I think one of the problems in our society is we don’t really view mental health as a problem. We even don’t view health as a problem. We’re in the midst of possibly taking healthcare from people, and before that, we didn’t even have much. We have a problem with preventative, proactive healthcare, even things like cancer. For things that are invisible like mental health, we have a really bad track record. We only want to deal with things that we have to deal with. My dad is a doctor and he deals with neonatal specialists, high-risk newborn babies. He told me that for every penny you spend for prenatal healthcare, you save one hundred dollars in postnatal care. But he said it’s a shame because insurance companies don’t want to deal with pre-care. It costs people so much money because they’re not able to deal with issues ahead of time. And mental health is more invisible than that.

One of the reasons I said I was “lazy” this year was because I was changing medications. It’s hard to think sometimes, and I went through that this year. It affects my writing. But I have the means to spend six months not doing much. But most people don’t have that, especially musicians. Most musicians are not making any money playing music and a lot of them don’t have healthcare at all. It’s hard for me to tell, because I’m very lucky to be able to take care of myself, but I know it’s gotta be harder for other people.

Counting Crows and Matchbox Twenty are bringing the “A Brief History of Everything Tour” to the Oak Mountain Amphitheatre on Wednesday, August 9th. For more information and to purchase tickets, visit theoakmountainamphitheater.com.

Chris K Davidson is a contributing writer. He also performs in the band Waterwells.