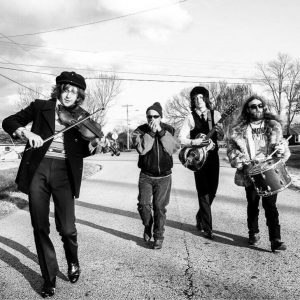 After getting to know the Blackfoot Gypsies from a previous tour stop, we are very excited to welcome them back to Alabama. For those that didn’t catch the last show, this Nashville-based group pulls together a blues and garage sound that reverberates through the heart of the retrosexual modern music aficionado. While finding yourself at their show with no introduction would definitely not disappoint, listening to a song like “Pork Rind” might get the Blackfoot Gypsies a VIP pass to your “get pumped” or “chillax” playlist.  I caught up with the co-founder and drummer, Zack Murphy, before they play the prestigious Syndicate Lounge tonight.

It was no surprise to hear that since their last time in the Birmingham that they have not slowed down and have been experiencing incredible momentum, playing to what seems like ever-growing crowds in the U.S. and Europe; from stages in Nashville and Atlanta to Spain, France, and Germany. The band notably mentioned that one of the most interesting tour stories stems from a visit to an anarchist commune in Christiana, just outside of Copenhagen in Denmark. Despite the band being so well traveled recently, the band has some ties to Alabama that seems to keep bringing them back. When asked what is their favorite thing to do in Birmingham, drummer Zack Murphy openly replies, “DRINK. Eating at Dreamland is pretty awesome, but we have to save that for after the show. Birmingham has a lot of other good food that we are just now finding out about so that’s nice as well. Also, hanging out with our buddies in Banditos. They’re always a blast to get silly with.”

The Blackfoot Gypsies are taking quite a tour of Alabama in October. Aside from the Thursday night show at Syndicate, they will be playing the Blue Moose Music Room in Auburn after the home game on Saturday, and wrapping up October 13th at AM Booth’s Lumberyard in Huntsville. Giving back to the fans that this group will be picking up across the state, the Blackfoot Gypsies will be releasing a new album, titled To The Top, on Plowboy Records early 2017.

The Blackfoot Gypsies will be joined by Baby Baby, Creature Camp, Red Harp. The show starts at 7 p.m. The Syndicate Lounge is located at 433 20th St S, Birmingham, AL 35233.