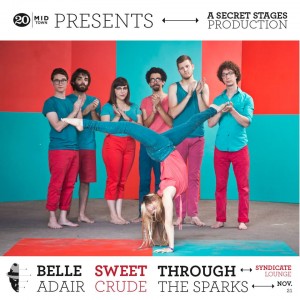 If you went to the Secret Stages music festival earlier this summer, you’re already wise to the awesome music scene we have here in Birmingham. The Magic City is a music city.

“We’ve been impressed and even a little surprised by the way Birmingham has responded for the last five years,” says Jon Poor, Festival Director. “Secret Stages 2015 was, in many ways, our best year yet.”

The good folks behind Secret Stages want to keep the party going, so now they’re offering winter and spring shows to tide us over until the big fest returns next year. Tonight, they proudly present Belle Adair, Sweet Crude, and Through the Sparks at The Syndicate Lounge.

“Sweet Crude was one of the highlights of 2015 and both Belle Adair and Through the Sparks are incredible Alabama bands,” says Poor. “We wanted to bring a little of that Secret Stages magic back and when the opportunity presented itself we jumped on it.”

The instrumentally-diverse Through the Sparks have been honing their live act and promise a real barnburner this weekend. “We are bringing the high energy of recent rock-trio shows,” says frontman Jody Nelson, “but are adding Through the Sparks’ own James Brangle into the mix for this show, and featuring Birmingham’s hardest working drummer, Zack Evans to round out the quartet.”

Joining them is Belle Adair, hailing from Florence. Sometimes ambient, sometimes riffy, they’re a fine presentation of indie and garage rock without playing to expectations. The band has shared a few members with Through the Sparks in the past, for a project called Rubys.

Poor and company found The Syndicate Lounge to be a suitable continuation of Secret Stage’s music-discovery mission. “We felt Syndicate Lounge was the right size and the right vibe for this type of show,” he says. “They have that ‘hidden gem’ aesthetic that we love to exploit.”

“It has that catacombed euro-pub vibe,” says Nelson. “If I could be a regular in a bar in town right now, this’d be the place.”