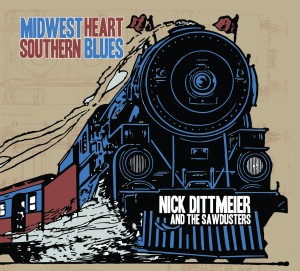 This Saturday, Nick Dittmeier returns to Black Market with his band, The Sawdusters. Hailing from Louisville, KY, The group embarked on a long-running tour since the release of their 2014 album, Light of Day.

They’ve appeared at several folk and Americana festivals along the way, and landed opening gigs for the likes of Whitey Morgan, The Wood Brothers, Hayes Carll, and Elizabeth Cook.

The band’s sound is taut with Telecaster twang. The guitars alone deliver a strong dose of country color, from the chicken pickin behind the verses to the dexterous solos and fills. Dittmeier’s vocal melodies enjoy layers of harmony courtesy of The Sawdusters, and it all comes together for an admirably genuine country feel.

Their upcoming second album, Midwest Heart/Southern Blues, is cast full of down-to-earth attitudes and compelling personalities. Dittmeier’s songwriting is an example of classic Southern storytelling, a process he’s been honing from the start. “I have just been trying to write songs about characters I’ve been and people I’ve known that genuinely live in the margins of society,” he says.

The new record releases on January 15, doubling down on the upbeat country twang that they established on the first album. While it’s not a stylistic departure, it was an opportunity for the band to come into their own. Dittmeier and company have embraced the challenges that come with extensive touring and self-producing. They’ve found what they do well and are determined to make it better and better. “With this record, I became comfortable with my mistakes,” says Dittmeier. “I’m just more comfortable with myself and what I feel like I can do well, and I’ve tried to develop that.”

The band has been touring for much of the last year and a half, and naturally they’ve witnessed sights known only to those who spend serious time on the road. Dittmeier recalls an episode:

“We were staying in a hotel in Asheville this summer and when we woke up, the cops were at the hotel,” he says. “We were told that someone threw a TV off the balcony that night and it went through a car window.” One may assume they weren’t the only band at the hotel.