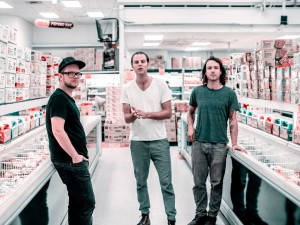 Hailing from Austin, TX, Blue Healer will be returning to WorkPlay on February 17. Having been on a number of national tours as Blue Healer and previous projects (including Austin-based Sons of Father), band members David Beck, Bryan Mammel, and Dees Stribling bring a big, unforgettable live performance that you won’t want to miss.

Inspired by life and the vibrant world that we live in, Blue Healer delivers a unique sound rising from this energetic 3-piece group. With a self-described basement and rock and roll sound, Blue Healer uses a big, crunchy upright bass, synths, and drums to create the music that they love to play. The group blends a mesh of indie rock and dance to sink you into the rhythm and deliver lyrics that stick with you.

Coming from Austin and feeding from the energy of the scene, the group has had the benefit of being surrounded by creative and encouraging musicians. “There are bands like Sweet Spirit and Walker Lukens & the SideArms that you go see and it inspires you to push your own creative limits. So, definitely, it has its perks,” says Beck.

The band admits that while the music scene in Austin is great, it’s a double-edged sword. As one of the biggest music scenes in the country, the competition has become incredibly dense. “Because it’s a very active scene, so many bands will play for free,” says Beck. “It can be hard to make a living in your own hometown. That’s why we love coming to places like the Magic City.”

Prior to their incarnation as Blue Healer, the musicians graced the WorkPlay stage once before, with an impromptu performance of the national anthem. “It was Bryan’s birthday that day and since the crowd was light, Mammel requested that the guitar player, Antonio Boñero, open the show with an instrumental and rousing rendition of the National Anthem,” says Beck. “The three people in attendance stood and saluted and great time was had by all.”

The band looks forward to being back in the beautiful city of Birmingham, seeing Regions Field, and partaking of some Alabama barbecue.

We look forward to seeing Blue Healer live at WorkPlay February 17, and getting a chance to hear their new album debuting late this year. You can preview and follow the band here.