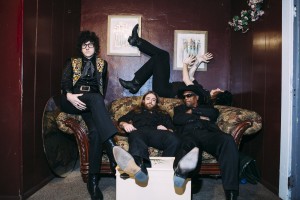 Ever put on an old blues record to let the smooth and soulful sound drown out reality for little while? How about some loud country or rock n’ roll to start your night off right and help that second whiskey kick in? Why should you have to choose? Popping on that first Blackfoot Gypsies song will give you just that. Coming out of Nashville and strongly influenced by  the legendary sounds of the greats like “Ladies & Gentlemen, The Rolling Stones,” founding members Zach Murphy and Matthew Paige “make music you can believe in, not just fall for.”

This Thursday, the Blackfoot Gypsies will hit the legendary Nick stage with Josh Taerk and Denver-based rock n’ roll band, The Yawpers. Our neighbors from the north are no strangers to Birmingham. After four years together, four albums, and a few new additions (Dylan Whitlow on bass and Ollie Dogg on harmonica), the Blackfoot Gypsies are ready to rock the stage with a sound that you can appreciate for its unique, but timeless style.

Between the low-fi vocals that introduce “Under My Skin” and the strutting riff of “Pork Rind,” the band genuinely recalls the blues-infatuated garage rock of the ‘60s and ‘70s. However, the group chooses to dig deeper into rock’s roots. Padded by heaps of fuzz, the gloriously dirty guitars harken back to those early days of amplification. The slide licks on “Don’t Know About You” could easily be mistaken for a front porch recording on an unknown bluesman’s cigar box. Ollie Dogg’s howling harp adds a layer of grit and authenticity that binds the ensemble’s sound together. This group may be the best thing in town to mix with moonshine.

Soon after they leave our fair city, the Blackfoot Gypsies will be off on their international tour to the land of Sweden. While this group has graced Birmingham before, they are sure that this will be their best one yet.  “Expect anything,” says Murphy, “cuz we’re gonna give you everything.”

Catch them at The Nick this Thursday and you’ll earn your bragging rights: you saw them on their way up. “We’re on our way to the top,” says Murphy. “We’re closer than we ever have been before. The person that does come will have a leg up on the person who doesn’t come. Pick which person you wanna be.”