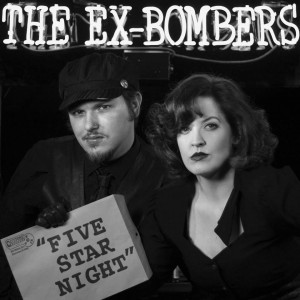 A dark and seedy duo is coming to The (dark and seedy) Nick. This Thursday, Birmingham’s star-spangled stage hosts the beatnik-sleazy saunter of The Ex-Bombers.

The duo formed in 2006, originally a light-hearted garage pop outfit. Keri Cousins handled the bass duties while Scott Walus strummed a 12-sring. The jingle-jangle was fun for a season, but the band eventually turned elsewhere for their sonic kicks. “After four years of trying to be bubbly, we both lost our minds and wanted to play just dark and seedy music,” says Walus. “We didn’t want try to reach out to an audience anymore; we wanted to lure them into our seedy world instead.”

The musical heel-turn was accompanied by a darker aesthetic, recalling the high-contrast stylings of film noir. “I think we just decided to embrace our inner Bond villains,” says Cousins.

“It is a beautiful world of femme fatales, intrigue, heavily implied sexuality, and analog culture,” says Walus. “Every interaction was so layered and polysemic and the fashion was absolutely striking. The whole noir aesthetic is complex in the best way possible.”

Now Walus supplies vocals and bass while Cousins covers percussion. It’s a bare-bones arrangement that gives you the essentials of a song without blank space, what they consider “maximum minimalism.”

“We have a dynamic with one another that the presence of adding another member would throw into utter chaos,” says Walus.

The Ex-Bombers’ tight-as-a-drum sound may not seem wide open to instrumental experimentation, but the duo does scribble Coppola-style notes in their music’s margins. “I’m not finished exploring the possibilities of our 8-string bass/drums duo,” says Walus. “Even after five years and two full-length albums, we’re still discovering new possibilities.”

Before you run to Bandcamp to see what that’s all about, deviate to your record player. The Ex-Bombers eschew the digital format from recording to publishing. Their music is only available through the honesty of vinyl and the intensity of their live tour. They’ll bring their records with them to The Nick, so hey, enjoy both, why not.

The duo is passionate about making the most of their minimalism. The Charleston hyperlocals grow their own food, make their own merch. Of course they embrace the hi-fidelity of analogue formats. Spinning a record is an experience to be savored. “I didn’t discover a love for Billy Joel from his greatest hits,” says Cousins, “I discovered it when I finally listened to the entirety of 52nd Street and Innocent Man.”

“Records are how we come to love a band,” says Walus. “Music makes its way into your heart at 33 1/3 revolutions per minute. It takes time to burrow its way down there and to connect with you in a meaningful and profound level.” See? It’s fun. Let’s all deviate.

Thursday’s show marks the Ex-Bombers first visit to The Magic City. “We made it a priority to play there in 2015 as so many of our friends raved about the music scene,” says Walus. “As a band, we’ve never really headed south, so we’re really interested to see reactions about our dirtbag spy jazz and beatnik punk music.”