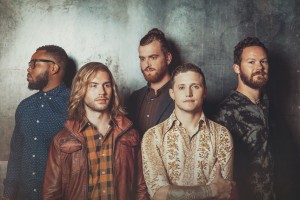 The Delta Saints are a rock’n’roll group based out of Nashville, Tennessee. Having recently released a new album, Bones, and finished the European leg of their tour, the band will be playing at Zydeco in Birmingham on Monday, December 7. I asked the group a few questions about their sound, shows, and plans for the future. Here’s what singer and lyricist Ben Ringel had to say.

Rachel Williams- How would you describe your music?

Ben Ringel- I think that at the heart of it, we make rock’n’roll music. There are influences of roots, psychedelia, and blues but I think what we’re trying to do now is more of a rock flavor.

RW- What inspires your sound?

BR- I don’t think there’s a specific thing that necessarily inspires our music. I think more so, it’s just the desire to create music that pushes our limits and keeps us interested. Like everyone trying to do this on a professional level, we’d all just like to leave a positive mark on music in some way or another. I think that to do that, you’ve got to focus on being creative and original.

RW- Can you walk me through the emotional process of recording the album?

RW- How does this album compare to your other records?

BR- I think that this album ventures much further into the modern rock’n’roll realm than we have ever gone before. I feel like we are finally getting into a great creative groove, and we’re all feeling incredibly optimistic about where our music is at, and where it’s pointed to. We’re listening to a lot of great modern music, and we’re all really riffing off of it together. We’re in a season of really defining what our music is and what we want it to be.

RW- What inspired the album?

BR- There was a lot of frustration that we all had coming into this album. We were at a place where we hadn’t made a new record in 2+ years, we had literally changed the line up of the band, and our sound had evolved to a place that was pretty far from where we had ever been. We needed a new record. We needed a new sound. That frustration really gave us a feeling of freedom to bring in influences and sounds that we would have never tried earlier in our careers. I think the frustration and the need is what really inspired Bones.

RW- What kinds of shows have you done recently and what other tours will you be doing?

BR- We just finished our eighth European tour and are heading out on our last US tour of the year. We’ve pretty much been touring non-stop for the past seven or eight months in support of our new record. We’re planning on taking the first couple of months of next year off so we can focus on writing another record and really stoking the creative fire.

RW- What is your favorite part of live shows?

BR- Honestly, it’s such a surreal experience to see people connect with the music that we’ve written. These songs come from such a deep place in each of us, and to see the songs take on meaning to others is just incredible.

RW- And finally, the age-old question, Do you have a favorite track off the album?

BR- I think that the collective favorite track is “Butte la Rose.” It was a completely new experience in the studio that day. Our producer literally sent us into the tracking room with no real song structure or lyrics. Dylan and I had a very vague idea about chord progressions and lyrical themes. Ed said “go” and 5 minutes later most of the song was done. It was just a magical moment that I’ve never really experienced before. It really opened our eyes to embracing the studio mojo, and being ok with letting go of our tight creative grip, and letting the moment happen.

Photo by Alysse Gafkjen, courtesy of Loud and Proud Records.