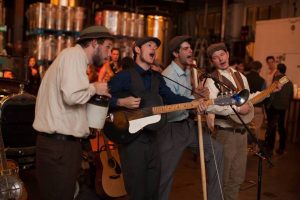 Without a doubt, there is an abundance of talent in an ever-growing number of musical genres and sub-genres, but sometimes going back to simpler times provides a sense of nostalgia that predates one’s own years. The Steel City Jug Slammers have been providing just that since they hit the scene in 2012.

Birmingham’s Steel City Jugs Slammers provide audiences with a one of kind experience. From the moment that they take the stage, spectators will immediately take a step back in time. From their appearance, to their instruments, to the old southern banter, this group has all the charm of a century-old traveling music show fresh off the train, and will keep your attention captive from the first time you hear the blow of the jug and pluck of the tub bass.

For nearly five years, Ramblin’ Ricky Tate, Washtub Jay, and Byron Barry Tate have roamed the country and provided authentic jug music to the masses. Recently, the band added G.,W. Henderson on guitar, Anthony Suttonwood on banjo, and Tyjo on washboard. The band roots reach back to the Bate brothers’ travels with a number of bands. The brothers once met railroad-traveling musician Stumps the Clown while he was riding through town. Inspired by the music, clothes, and stage personas of Stump and others, the brothers picked up a washboard and thus began the Steel City Jug Slammers.

In 2015, the Steel City Jug Slammers won the Minneapolis Battle of the Jug Bands have been featured on NPR’s “A Prairie Home Companion” and will soon have a “Tiny Desk” session.  Drawing on inspiration from the national jug band scene as well as classic country, blues, and Jazz, the band has produced a self-titled album and some special session recordings. Band member Ramblin’ Ricky Tate has also done a number of solo productions including his new EP, Didn’t I Try.

Aside from providing a truly unique musical experience, The Steel City Jug Slammers serve as a real example to the music community. Making music for the working class should naturally have some work involved. It’s evident that the group pours everything that they have into giving their audience something memorable. Should you stumble across their website, you will see that they are always hard at work to release new music, promote shows all over the country, make their way on television or radio, or just share anecdotes with their fan base… like how to make a musical stove pipe.

That’s just what they show us. I couldn’t help but to ask the band about their instruments and where they come from. “New gear” would be the wrong term. “Well first off, you want to find a good strong jug that ain’t too dirty,” says Ricky. Then there is the fact that the rest of their bass line has to be fashioned by them directly.

Traveling the nation has its perks. Especially when you are constantly on the search for a pre-WWII banjo-mandolin, like the Slingerland that they picked up in Minnesota and later traded for the Gibson that travels with them.

Currently, the band is getting ready to jump in “Don,” the presumed working van, and head back home to Birmingham. With a busy northeast tour starting in March, it will be a while until you can catch the Steel City Jug Slammers back in Birmingham. Fortunately, they have quite a few appearances lined up before they head to New York, starting with a Ramblin’ Ricky Tate solo appearance at Buck Mulligans on February, 10. Also, you can catch the whole band at Monotonia and Marty’s on February, 17. You won’t see these old-time troubadours back in in town until May, when they play the Strawberry Festival in Moulton.