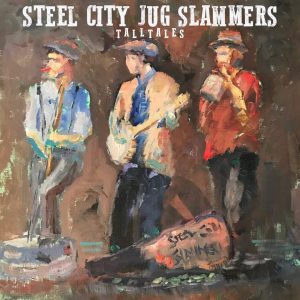 So sings Ramblin’ Ricky Tate in “Blue Jean Blues,” track 10 of Steel City Jug Slammer’s latest album, Tall Tales. While they’re a familiar sight on the stages and sidewalks of Birmingham, the old-time jug band does leave their home city quite often to perform across the U.S. Each of these new towns leaves an impression on the seasoned musicians, and Tall Tales is a colorful collage of those characters, sites, and experiences.

Tall Tales is an uncanny time capsule. Those unfamiliar with Steel City Jug Slammers couldn’t be blamed for mistaking the release date by a few decades. The album, released April 1, 2018, faithfully recreates the do-it-yourself street music of the South, as shaped by the Roaring Twenties and Great Depression.

The album celebrates a number of Southern cities visited on tour, starting with the first track, “Mobile Shake.” During their first visit to the Port City, the band had only one gig lined up for the weekend, so they decided to busk. Their music caught the ear of a local venue proprietor, and they secured a weekend residency on the spot. The deep washtub bass and jangly guitar strut along like a Mardis Gras procession, led by rollicking banjo and mandolin.

“Devil Man” recalls an incident on the streets of New Orleans. The band was in town to record their first album, and had been busking in the French Quarter during the day. As they were packing up to leave, a sickening crash echoed down Royal Street–their jug had shattered.

“Well, we had to record the next day and that was our only jug,” says Jay. “We decided to turn a problem into a solution by purchasing a jug of wine. The only thing was we had to finish it all that evening.” Jay volunteered to empty most of the jug himself and promptly passed out. That evening, devils and soul-snatchers haunted his wine-soaked dreams, now exorcised in song. The slow groan of the jug and puckish tremolo of mandolin evoke Big Easy attitudes with shades of fiendish folklore.

Track after track, the album remains upbeat. Many of the songs were written in the midst of tenacious touring, and that on-stage spirit is evident in the songwriting and tempo. “A lot of it probably has to do with live performances and trying to keep people entertained and their heart rates increased,” says Jay.

That live energy is simulated in “Smoky Mountain Hi.” Their recollections of Gatlinburg start as a typically-jumpy tune, but near the end, the instruments drop out and the vocals are supported only by foot stomp. One can hear the clink of glasses and the ambient chatter that comes with any bar gig, and then the crowd claps to pick up the beat. It’s a nice break from the song’s established format without deviating too far from the style they’re committed to.

“Gimme a Call” begins with lonely, resonating chords with plenty of space in-between. Are we in for a love song, or a sentimental ballad about misty foothills? Little hints of suspense and resolution move along until, like a tonal fake out, the band picks up with rubbery washtub bass and jolly strumming. Instrumental breaks allow for quick runs and stunts, and it’s easy to see how Steel City Jug Slammers can be relied upon to liven up a crowd.

Tall Tales is confidently recommended for fans of old time folk and blues, and for anyone who admires the homemade ingenuity and cheerfulness of old skiffle music. The album is available online, or you can pick up a copy at a show.

A true patron of the arts may also support the band through their Patreon page. There, benefactors can expect more songs and videos, plus a few other treats in the works. Skits, music lessons, maybe a Q&A session–anything could happen.

Album art by Simran Narmis, painted live at a show in Portland, Oregon.