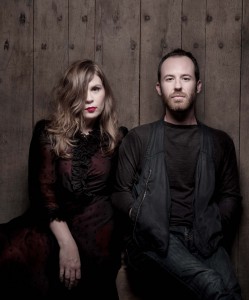 While the festival itself is still months away, Secret Stages has prepared something special in the meantime to tide you over. For this year’s Spring Showcase, the good folks behind Birmingham’s music-discovery fest proudly present three quality acts at Syndicate Lounge. Adron, Timber, and Future Elevators perform this Saturday.

Timber is equal parts Will Stewart (Willie and the Giant) and Janet Simpson (Delicate Cutters, Wooden Wand). The musicians are both experienced songwriters, and the creative symbiosis is obvious from the start. Never overstepping the lyrics, their music drifts along on indie and folk currents, reminiscent of The Grenadines.

The two met in 2013, during the recording of Stewart’s Coosa EP. Producer Les Nuby believed that Simpson would add something unique to the music, and called her in to provide vocals and keys.

“I went in, not really knowing who Will was or what his songs would be like, and I only had about an hour to spare that weekend as I was just about to leave for a tour,” says Simpson, who was understandably nervous when she arrived to record on the fly. “But I immediately liked Will and his music was instantly lovable. It was one of those instances that called me to the present. That session stayed with me, afterward, both the songs we did together as well as the brief encounter we had as musicians.”

Although she had to leave immediately to catch a flight for her tour with Wooden Wand, Simpson kept in contact with Stewart and soon began sending songs back and forth. It was clear that they had a natural songwriting chemistry.

“Sometimes, in my experience, working with other songwriters is scary and cumbersome,” says Simpson. “But in the case of working with Will, it’s been really natural. Nothing is ever forced. We never even have to talk about a tempo change or rubato or a phrasing. It just somehow works.”

Among the five songs on their Timber EP, “Home at Last” is open to interpretation. “In my mind, I thought it was a general reflection on letting go of societal pressures, material possessions, attachments of any kind,” says Stewart. “If you dwell on your version of the past or what you think might happen in the future, it only leads to suffering or anxiety eventually.”

Atlanta’s Adron seems to draw inspiration from the far side, lacing humor and observation into her polyglottal lyrics, along with birdcalls and even a Dune reference or two. Instrumentally, she’s delightfully dexterous, transitioning from mystical arpeggios into jazzy rhythms on songs like “Mister My Lord.” Last year, Wilco named her record Organismo as one of their favorite recent albums.

Future Elevators played to a packed house at Rogue Tavern last year, as one of the Secret Stages’ surprise artists. The band released their Future Elevators LP in February, complete with the substantial blend of psych and indie rock that prompted a swarm around their merch table last August.

That enthusiastic response is indicative of an increasingly receptive audience, a music scene that has grown tremendously since the arrival of Secret Stages. Stewart believes that eclectic events and venues expose music lovers to new genres and artists, expanding the city’s musical horizons.

“You had places like Cave 9 and others that were already here, but they were more narrowly focused, in terms of genres, etc.” he says. “So it seemed like Secret Stages came along as a nice festival outlet to the burgeoning local scene, which, in my opinion, was sparked by Bottletree. With Secret Stages and Bottletree, Birmingham cemented its place on the expanding ‘circuit’ for emerging artists in the southeast and nationwide.”