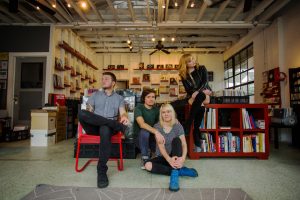 In some ways, referring to the richly varied texture of the new DieAlps! album as “indie rock” seems inadequate; almost nondescript. But the paradox is that non-specific terms can also lack limits–and “limitless” seems more in keeping with the spirit of Our City, the Tampa band’s proper full-length debut (which is out today via New Granada Records). Though they utilize a whole range of approaches and textures that will be familiar to anyone schooled in the classic eras of guitar-centric indie and alt rock, their own approach is shot through with a uniquely bright, energetic purity which somehow emboldens (rather than weakens) the force of their riffs and melodies. Led by the husband and wife duo Connie and Frank Calcaterra, I spoke with the latter for this interview ahead of their performance this Saturday at the Secret Stages music festival.

DD: Your press release mentions some lineup changes. What were the most recent ones?

DD: What’s your strategy for a live sound? Are you trying to approximate the studio sound, or doing something a bit different live?

DA! The songs had already been recorded when Jonathan and Sarah joined in 2016. I think the original intention was to stay true to the album, but inevitably the live sound has evolved over time. Everybody has their own style of playing – Jonathan comes from a pop-punk background, and Sarah is more classically trained. If anything, I would say we come off a little heavier live than we do on the album.

DD: Clearly you’re moving from a twee, baroque pop sound here to some of the bigger sounds in 1990s indie rock. Did you go into the songwriting with that in mind, or did it just turn out that way in mixing?

DA!: It honestly just happened naturally. Most of the songs on our debut EP were written well before DieAlps! was a thing. So when it came time to start writing new material, I think we were still trying to find our sound. Regarding songwriting, it was definitely less about “is this how we should sound?” and more about “is this a good song?” This is also probably why we ended up with such an eclectic selection of songs.

DD: Aside from a shift of emphasis in musical influences, were there any life changes for the band which you think color these songs in general?

DA: Lyrically, Connie and I both tend to infuse current events into our songwriting, mostly as a way of getting our frustrations out. Musically, I would say that the newfound skill set (specifically the addition of Cormac and Vinnie) allowed us to venture out into new territory. Changing band members is less than ideal, but sometimes life gets in the way. You’ve just gotta roll with it. The next album is in the works with our current lineup and we couldn’t be more excited to see where we can go from here!

You can check out the new DieAlps! album today and see them live this Saturday at the Secret Stages festival. The band performs at Rogue Tavern at 7:45 p.m.