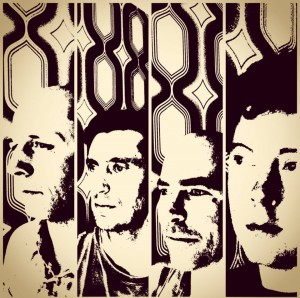 There’s something cathartic in singing about our vices. We often use music as a means to wash away our problems- if only we have enough volume. Sea Fix is a sonic tidal wave.

After hearing the immensity of their recordings, it may be surprising to see that the band consists of only four members. Chris Rowell pulls double duty on mid-to-high vocals and steady bass. Chris Hoke supplies guitar, demonstrating a handle on rock conventions while often drifting into experimental territory. Bret Estep handles drums and other beat making devices. Various other melodies, rhythms, and effects flow in via Tony Oliver’s  keys and synth sounds.

The band formed in early 2013, after some collaborative work between Rowell and Hoke. Rowell, who had previously worked with Warm in the Wake and King Lear Jet, began recording exploratory tracks with Hoke (himself a veteran of The Sudden Rays and 3D5SPD). They soon invited Estep and Oliver to join the sessions and realized that they had been recording the first songs of Sea Fix. “Making the album was how we shaped ourselves into a band,” says Oliver. “There’s a lot of experience in that recording.”

Sea Fix practices and records in their own studio space in Avondale. There, they are able to feel out new material and allow songs to develop organically. Rowell’s bass lines and concepts are typically the catalyst for Sea Fix’s composing. “He comes up with a lot of the initial ideas,” says Hoke. “His bass leaves us a lot of room to work with, and sometimes we’ll base a song off the vocals. He’s generous with the starting material.”

Since their initial sessions, Sea Fix has released a 7″ single and now has singles available for download. Their recorded work features the group’s unique take on the spacey, ambient-rock style that has influenced many musicians both in Birmingham and throughout the indie scene. Their sound is not achieved simply by cranking up the reverb and delay- it’s a psychically-coordinated team effort.

The band’s vast, echoing approach to rock can be attributed in part to outside projects at the group’s inception. When he joined, Estep was scoring a film favoring ambient music. “That interest in instrumental noise was going on at the same time that we started playing together,” he says. “It was around us and naturally showed up in what we did.”

Sea Fix dodges the definition of any one genre. Roles are kinetic, and each song sees band members using their skills in vastly different ways. While he can undoubtedly supply complimentary chords and licks when necessary, Hoke excels in unconventional guitar accompaniment. In “Call and Response (Canines Among Us),” his guitar serves as environmental noise, adding a slightly chaotic feel to the song.

To achieve those cosmic qualities in his playing, Hoke employs a variety of effects pedals by Sitori Sonics. Emanual Ellinas builds these boutique pedals in Birmingham, and specializes in far-out effects. “They’re exactly what I need,” says Hoke. “I’ve replaced all the vintage pedals on my pedal board. They were great, but Emanual’s are much more reliable.”

“Call and Response” emerges with a swelling of electronic sounds a la certain Step-Pepper artists. That wellspring of synth comes courtesy of Oliver’s array of keys. His digital assortment of chimes and tones rises up to the surface like sea creatures from the abyss. Supporting it all, Estep’s drums are anything but rudimentary. From the urgent hat and snare of “Carnal Feast” to the dramatic toms of “Tough Love,” it’s obvious that he enjoys switching up the wherever he hears the need.

Elsewhere within the group’s portfolio, Oliver demonstrates an appreciation for classic synth channels. Everything about the intro to “Favors” prepares you for an ‘80s pop tune, but when Rowell’s voice enters, the song glides into a bass and ska-chop groove. That’s what Sea Fix handles so well- setting up an audible environment for Rowell’s lyrics.

Those lyrics tend to focus on the animal nature present in humans- the drives and impulses we try to suppress. “It’s the kind of thing you think of late at night,” says Rowell. He explores these thoughts directly in the id-fueled “Carnal Feast.” “That’s a horror movie of a song,” he says. “Everybody has their vices, so you might as well take a look at them.”

There’s something fatalistic within that perspective, an attitude that manifests in “Top Five Fears” through lines like “The search parties place bets.” Musically, the song is vast and bright, with subdued verses blooming into a group chorus with soaring guitar lines.

It was this infatuation with the primal that gave rise to the band’s name. Through their interest with the rougher parts of nature, they developed a healthy respect for the sea. “It is humbling in the greatest sense of the word to think about how quickly the sea can come and take back cities, countries… entire swathes of people and creatures in one tidal wave,” says Rowell. “The Sea can fix us, set back the clock, put species on an even playing field, and then turn around and let us go swimming again.  For me, it is as comforting in as many ways as it is scary.”