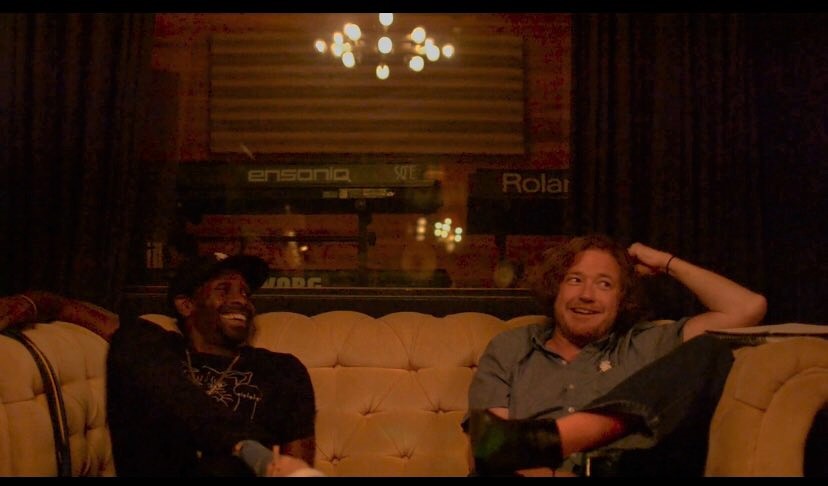 Even while doing something as simple as an in-person interview, Birmingham’s Randall Turner (DuJour, The Green Seed) is constantly looking for ways to create art in the moment.

As I sat in the control room of the Communicating Vessels studio in Woodlawn, surrounded by a plethora of recording equipment both digital and analog, Turner had set up his camera on a tripod to document video of himself and his collaborator, fellow scene stalwart Jim Fahy (First Kentucky Post, Teen Getaway). He would later take stills from the video (which ran the length of at least a third of our conversation) to use for album artwork, social media posts, and even the press photo you see in this article.

“That shot is what it’s all about,” Turner said. “Some of this is definitely going on Instagram. Put some music over the video for 15 seconds, and people will lose their minds.”

“This is a longtime friendship on display,” Fahy added.

Though the following conversation was edited for length and clarity, it shows a deep musical connection between the two artists as they discuss exploring new sonic textures in their yet to be named project, meeting nearly two decades ago and their plans for the upcoming Saturn show.

Chris K. Davidson for Magic City Bands: So how did this project come together?

Jim Fahy: Randall just sent me a text out of the blue and asked if I wanted to play at the Firehouse Community Arts Center benefit show [ed: a show that was ultimately canceled because of weather, but has plans to reschedule]. He said he had some music that he wanted me to play some weird guitars on. So I told him we needed to figure out a time to get together.

Randall Turner: We had four rehearsals in four weeks.

JF: We got right to it. We got together in a small place that I had. I didn’t even have my pedal board totally together because I hadn’t been there very much. I had gotten it rewired, but had barely played it before the pandemic hit. Right now, it’s our two general sensibilities, the beats and rhymes that Randall has and my guitar, not necessarily from a rock songwriting standpoint, but more of the aggro-ambient standpoint.

RT: The thing about Jim is he can get aggro (aggressive) and ambient, but he can also find those tones and textures under there that sound very musical, so that allows for a little playoff. A guy asked me the other day if I wanted to have a drummer onstage. I said I didn’t think so because we wanted the drum textures to be tuned. That’s one of the hardest things to do is tune live textures. But we can get to those textures easily, and it almost creates a downtempo effect. It’s got the same speed, but a different tonality.

JF: Ambient music, in a sense, can be ignored, but you can give as much focus as you want to it. It comes from that standpoint of liking My Bloody Valentine where you have these really intense, loud textures, but you’re still going for a sense of suspension. There’s a lot of stuff going on, but it can leave you really still or you can tune in on the details.

One characteristic of my setup is I can make things sound old, really old and warped really fast. I wanted to make things sound like samples. As we were diving into it, I was down on my hands and knees messing with my amp and pedals, and I realized that I am like a DJ with a guitar. I’m throwing loops, I can add multiple loops happening at the same time, I can pitch stuff a certain way. We let things go and we find the dynamics where we’re really putting things actively against each other. It’s really listening to each other.

RT: Once I get started and I’m performing, Jim is so good at just letting me zone out, that I almost forget to just listen and find other pockets of spaces that you can deliver to the audience. We haven’t had an audience yet, but in my mind, that’s what I’m trying to do. There’s an audience I’m trying to connect with, all various types of music that have any electronic form.

JF: It’s all electronic, at least what I’m trying to do with the guitar. Sometimes, the textures are straight-up aggressive, and there are definitely points where we crank it up loud. It’s live sampling. I can take the parts, send the loops, be able to line things up in real time with Randall. He’s playing beats, but like in the first rehearsal, he was playing the drumsticks and combining samples and drums with that. It might be bright and funky for a minute, but we’re taking it and mangling it into something else.

The cool thing about being able to lock in like that as well is that I was surprised at how generally in sync everything was. It’s like you’re playing with a DJ spinning vinyl; it’s never going to be perfect because that’s where the funk is and the rush and drag of it.

Randall is also looking to break form too because though he might make music with similar methods, he’s already thinking about structure so much. I’ve played in bands that have been really structured, and even when I’ve played in these ambient gigs, they can be 60/40 or 70/30 or I have an idea of what I want to do, but there’s still room for experimentation or exploration.

RT: But I want this project to be something different than that. On the performance day, I am going to go to Seasick and get three records, and I’m going to sample those records live onstage into the machine, so that they are brand-new ideas from the start. I want to bring the audience into this experience of this is where we’re going even if it seems completely random. Then I’m going to morph it and we’re going to go into a musical journey.

JF: At the time, it’s important to not make it seem like two things on top of each other. But that’s what gives it the push and pull. The first time I ever heard him go loose on the mic, I didn’t stop what I was doing, but it was definitely the excuse to pull it back, see where it’s going and see where it’s building.

The temptation early on was to take one jam and play it all the way through for 30 to 45 minutes. Sometimes that’s fun, but it’s also risky. It’s okay to slow it down after a few minutes and take a breath. That refresh can get you going to finish the set.

RT: We’ve had that happen a few times where we’ve headed somewhere and I could feel something wasn’t gaining continuity, let’s just morph or tweak it. Just the idea of how excited I’m going to be able to drop those needles on those three records the day of the show, I will be getting the same jolt of energy as the audience.

Once we get to the point where we need to morph things, that’s when I’ll jump in with the rhymes.

MCB: Do you focus on anything specifically with the lyrics?

RT: This project will be about the music and the rhythms. I’m always focusing on cadences and unique phrasing coupled with odd timing resolutions.

JF: I can get really loud or really pretty or really funky. There’s never not been a time where Randall couldn’t dive in and go. Once again, it goes back to listening.

RT: It’s fun as hell though to let the other person affect you.

MCB: And it’s interesting to see what people are going to react to with that melding of styles. Everyone listening has their own musical tastes, so I’m sure they’ll grab onto certain elements of the performance.

RT: That is the goal.

JF: I’ve heard from other musician friends that say they’re really excited to hear what we’re going to do. Which still can make you a little nervous. They do know what both of us have done on our own, so it would seem that the idea of that collision would be interesting.

RT: It’s at least good enough to go see the train wreck. Even if it crashes and burns, it’s worth seeing.

JF: Right now, it’s completely improvisational with us, but it will be interesting to see how it grows. It’s still nascent right now and in its very early stages.

RT: This is the only way I want to do it, where it’s random and people come in wondering what records did we get. I’m going to tell people before the show that I will sampling these records live onstage. This is performance, how it should be done. It really irritates me that no one has thought to do it before.

I’m only speaking to Birmingham in this situation. We have these people with these backgrounds that are always around each other. Guitarists, drummers. They’ve been in close proximity with rappers and electronic musicians and they haven’t acted on it.

JF: There has been a sensibility here of all that stuff colliding in the early to mid-2000s when we met.

MCB: How did you guys meet each other?

JF: Randall had an R-Tist release show, and he didn’t want to play it. He asked other people to play it, and my old band, Teen Getaway, we were the only band that played, and the rest of the acts were MCs. That was the night I met Shaheed and Fed Weller.

MCB: Where was it?

RT: At a place called the Arena and then it became Base Camp. It used to be right across the street from Black Market in Five Points.

MCB: Let’s go back to that idea of completely surprising people and yourself with this approach to three records. I had a conversation with someone recently who said they really liked bands that sounded the same live as they do on recordings. In a way, I understand that, but you’re also paying for two different experiences.

RT: Absolutely. And I want the recordings to be the same idea. We go in blind and we come out with something. We’re not going in saying we’re going to play an A chord and a B chord. I want this experience to be as unique as possible. And whoever wants to join me on this as I continue, come on in. Jim is just the first one I corralled.

RT: We can get both textures. We can get deep, dark and raggedy drums and really bright harmonies. It’s not done enough. We’ve got all of this technology to make it happen. Deep down in my soul, this is something I want musicians to take on themselves. Just go learn to create on the fly and give people new experiences.

MCB: Is there going to be a single or album release coming up?

RT: We’re going to get in here [Communicating Vessels] to record at least a single, and the album is still in the works. But first, people will get to experience the show.

Randall Turner and Jim Fahy will play Saturn on July 10 and will be joined by False Jasmine, The Phasing Octopus, and Suaze. Doors open at 7 p.m. with the show starting at 8 p.m. Tickets are $10. For more information, visit Saturn’s event page.