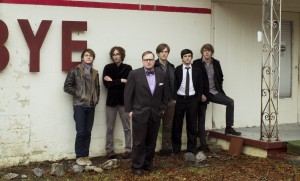 Starting on time seems to always paint the first of lasting impressions about a concert. Had they done that, opening act The Bear would’ve been playing to a near-empty room. Only those sitting in their comfy balcony chairs and down-below lounge tables at Birmingham’s WorkPlay were in attendance so far. The flyers and online event data actually advertised for the show to kick-off at eight, though things got started around nine. Not sure if the three-act show sponsored by Birmingham Mountain Radio meant that doors opened at eight sharp, but no one seriously complained about the event’s tardiness.

The Muscle Shoals-based band The Bear, fronted by guitarist Nathan Pitts and lead vocalist Louisa Murray, showcased an unusual brand of rustic Americana folk that blended elements of John Mayer, She & Him, and Fleet Foxes, but modestly toned down using savory, slow-cooked effects. This was evidenced best on “Hitchhiking,” where guitarist/vocalist Nathan Pitts plucked away a melody that mimicked the Appalachian gracefulness of Mayer’s “Queen of California.” With tambourine in hand, lead singer Louisa Murray – who handled the bulk of the lead vocals – seemed nervous, off-putting and almost always looked through the souls of the gathered. When she worked her way into elongated belting and showed off her Southern-pickled personality, she loosened up.

Their set was equally divided with standout tracks from their 2011 self-titled debut disc and their recently-released follow-up, Overseas Then Under. Mostly, the warm sounds of comforting, half-baked instrumentals left listeners in a trance, but they occasionally lifted the mood. Possibly the most effective, “He’s Not Mine” rollicked in the motions of a gospel camp-meeting until the drummer entered a hi-hat tussle that triggered country-tinged disco. The doo-wop soul of “I Want” and “I Got a Man” worked just as well.

A member of the audience assured me that the Nashville-based band Luella & the Sun, like Athens, Ala. heroes Alabama Shakes, were the next indie band to break out. I kept my reservations. By the time they took the stage, the WorkPlay Theater was packed to full capacity. Still riding high from their highly-praised SXSW stop, Luella & the Sun kicked off their hour-long set with a tantalizing bluesy rock intro to “Fly So Free.” Suddenly after lead singer Luella got deep into the heart of her verses, she decided to break the song with gospel testifying. She mesmerized the audience as she belted out intense wails with the gravitas of Janis Joplin. She did get a little help; she was aided with two microphones neatly placed on stands decorated with Christmas gold garland. That technical support allowed her voice to resound throughout the entire building like a siren. The fiery ad-libs on her a capella selections drew much attention to her spirited instrument, particularly when she smothered a soulful heaviness upon “His Eye Is on the Sparrow.” There was a moment when Luella accidentally flubbed the lyrics, yet the audience waited to see just how she’d dig herself out of this very vulnerable moment. From out of nowhere, she jumps into a lyric that catches everyone off guard: “I was born into sh*t.” There was a robust moxie that dominated the whole performance, as if she and her blues-possessed band had been living on a diet of Bonnie Raait and NaS records. Yeah, there were times when their songs felt like hip-hop excursions; Luella made the transition from hippie songstress to Southern emcee. But the group hit their stride while fleshing out Pentecostal funk on tracks like “Sign of the Judgement,” and provocative blues tunes like “Light in the Sky” and “I Was Born into Sh*t.”

Local favorites St. Paul and the Broken Bones spared no time kicking into high gear with Tom Waits’s “Make It Rain.” In the charismatic hands of frontman Paul Janeway, the tune transformed easily into a Johnnie Taylor-coated blues number. Throughout the bulk of their one-hour set, there were plenty of tributes to Memphis soul. Janeway jolted through Otis’s “Respect” and took off through the crowd and back to the stage with the same fervor of a marathon runner. And there’s plenty more where that came from: Sam Cooke’s “A Change Is Gonna Come” was reimagined as an Al Green scorcher; “Like a Mighty River” soared like a Stax workout; Janeway’s dance moves lit up the Solomon Burke classic “Everybody Needs Somebody to Love” with the same personality of the late John Belushi in Blues Brothers garb. The crowd of mostly thirty-somethings were also schooled with a little Alabama History 101, when Janeway proudly exclaimed, “We’re gonna do the Wilson Pickett version, not the Solomon Burke one.” Pickett was born in Prattville, minutes outside of Montgomery. Despite Burke getting the historical marker for recording the tune first, it is Pickett’s fast-paced version that lives eternally in our hearts.

Their set also explored more imaginative rock soul as the blazing three-man horn section and garage rock guitars, led by Browan Lollar and Jesse Phillips, dug deep into the blues on their own originals: “That Glow” and a sorrowful ballad “Broken Bones and Pocket Change.” It’s obvious that St. Paul is blessed with a Davidic anointing, as he perspires relentlessly while showing no sign of slowing down. Even when he crashes to his knees and begs using James Brown magic, he’s amped up like a tent revival preacher high on Red Bull.

It’s quite surprising to see St. Paul & the Broken Bones, the evening’s closing act, wowing a sellout crowd with only a four-song EP to show off. They’ve only been playing together for a year, but St. Paul & the Broken Bones – quite possibly the next rising Southern band to splash upon a Rolling Stone two-page spread  – has impressed practically every person to ever witness them live. With each gig big or small, they convert the curious to their legion of fans. The only thing holding them back from Alabama Shakes notoriety is an album. Their combustible live act needs no serious tweaking.

J Matthew Cobb is the managing editor of HiFi Magazine.