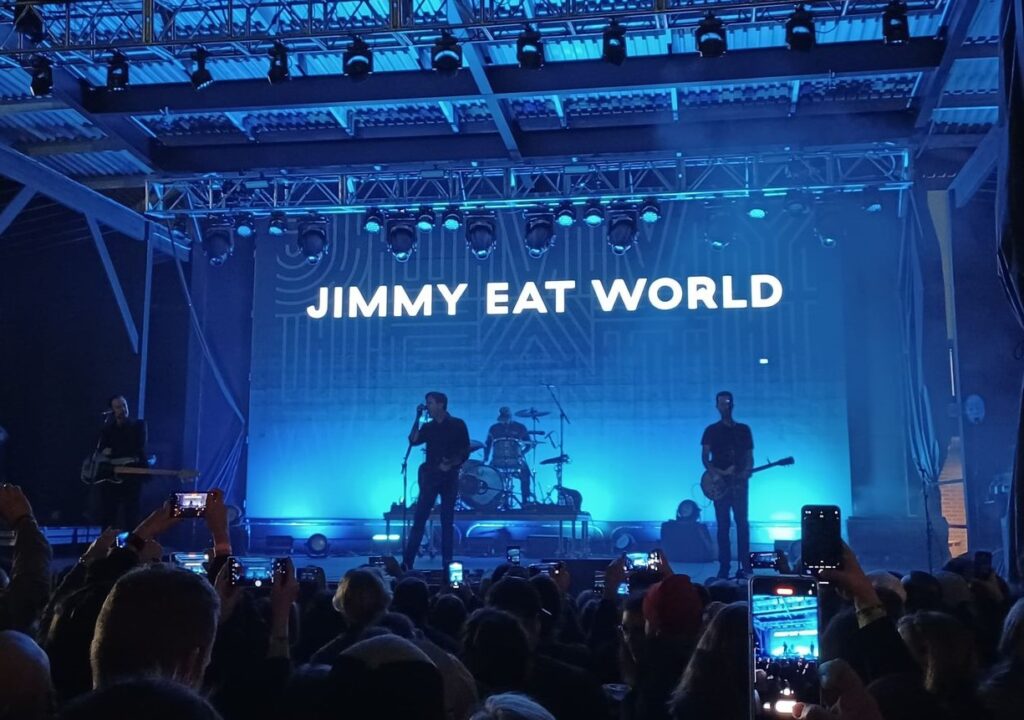 “Well, this is incredible.
Starving, insatiable,
Yes, this is love for the first time.
And you’d like to think that you were invincible.
Yeah, well weren’t we all once
Before we felt loss for the first time?
Well this is the last time.” 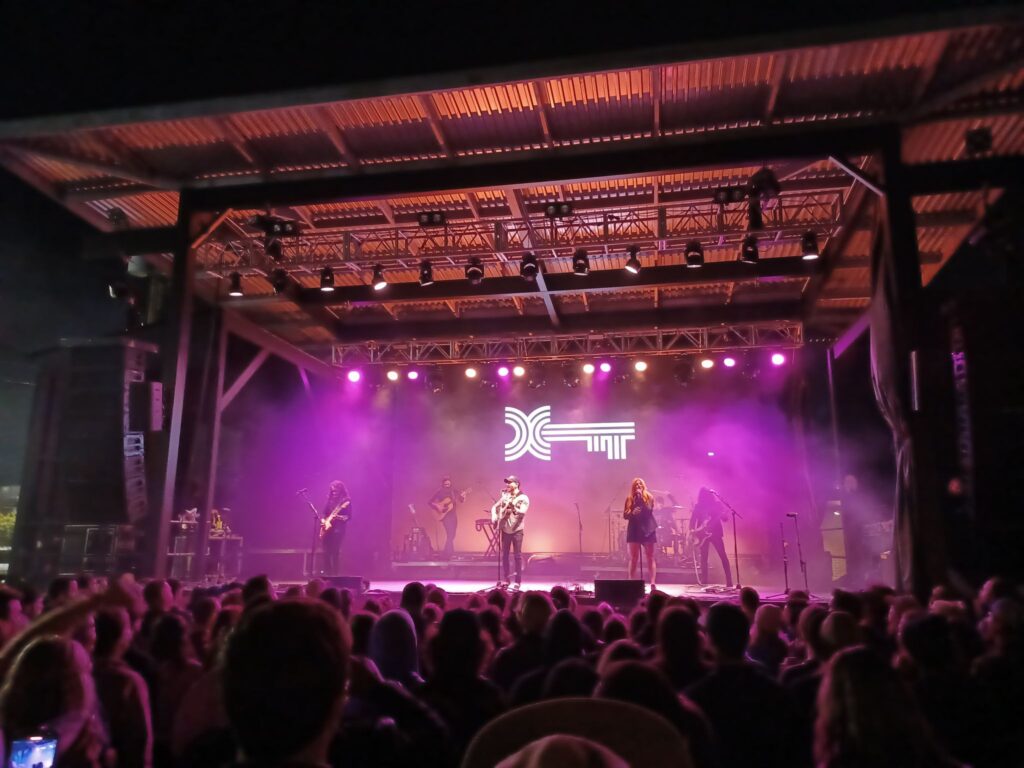 Such was the vulnerable final verse of “This Brilliant Dance,” the opening track of Dashboard Confessional’s sophomore album, The Places You Have Come to Fear The Most. Exactly like the album version, Dashboard’s mastermind Chris Carrabba sang the tune only accompanied by his trusty acoustic guitar, a choice that drew in the crowd and made Avondale’s massive backyard venue feel as intimate as a 50-person listening room.

After that quiet intro though, the rest of Dashboard Confessional (two additional guitarists, a bassist, a drummer, and female vocalist) joined Carrabba onstage to play amped versions of fan favorites, “The Sharp Hint of New Tears,” “The Good Fight,” and a fully electrified rendition of the usually solo acoustic “Saints and Sailors,” as well as anthemic hit singles “Don’t Wait” and “Stolen.” They continued into the live debut of a song off their latest album (“The Better of Me”) and a cover of “Just Like Heaven” by The Cure, a band that has to be at least partially responsible for the two acts of the evening.

As the night progressed, I joked with my cousin that the lead vocals at Dashboard shows are about 70% audience and 30% Chris Carrabba, who likes to pull away multiple times from the microphone to let the crowd take over for a more immersive experience (i.e. “The Best Deceptions,” “Again I Go Unnoticed,” and “Screaming Infidelities”).

Carrabba also provided jovial banter throughout the night, quipping “I’m so glad to be a part of the MCU” right before “Vindicated,” a tune that catapulted him into the limelight after being featured over the credits in 2004’s Spider-Man 2.

He introduced the band’s final song (“Hands Down”) with a description that he’s probably used thousands of times over the few decades: “The song is about the best date I ever had.” After one chaotic flourish of instruments and Carrabba slinging his guitar completely around his neck, the band exited the stage. 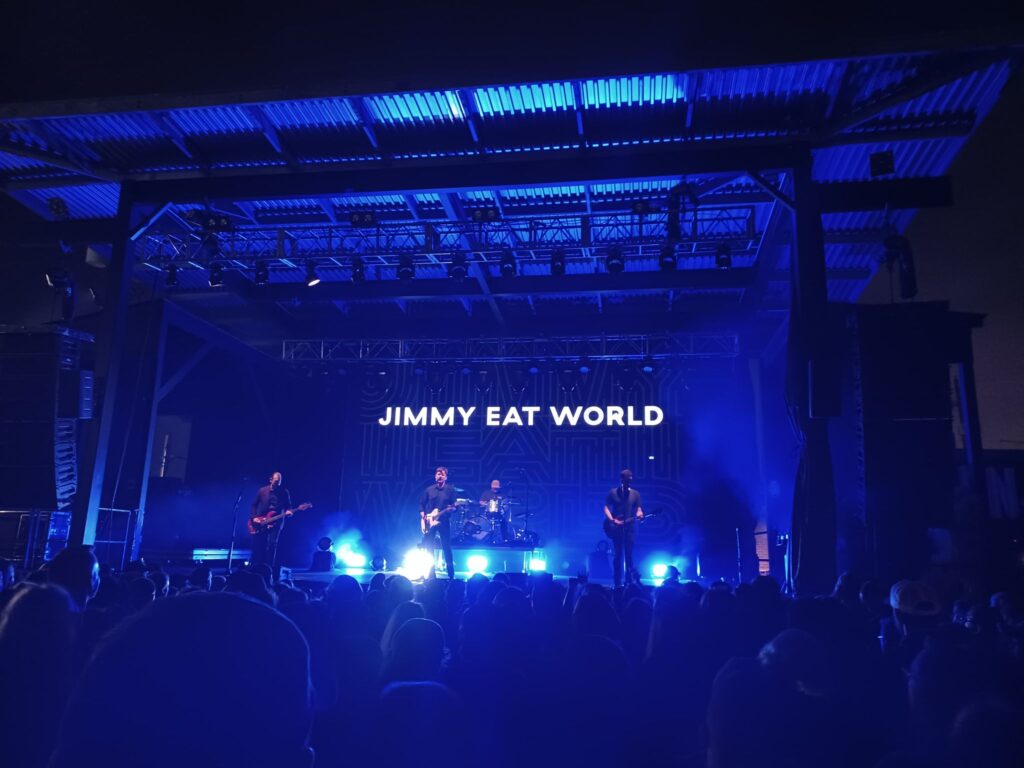 After a twenty-minute intermission, Jimmy Eat World walked onto the stage to the instrumental opening of their 2004 album, Futures and dove straight into the title track. The band then proceeded to pummel their way through two of their most notable and aggressive tracks, “Pain” and “Bleed American.” If Dashboard Confessional began their set with a leisurely drive, Jimmy Eat World started with the pedal all the way to the metal.

Earlier this year, I purchased Dan Ozzi’s SELLOUT, a collection of essays exploring the major label debuts of eleven punk, emo, and hardcore bands. Jimmy Eat World’s chapter was particularly interesting because I found out that the band’s second guitarist, Tom Linton, was the main vocalist and songwriter for their first independent, self-titled record as well their first and only album on Capitol Records, 1997’s Static Prevails.

I find this fascinating because by experiencing the roles of both lead vocalist and lead guitarist at different points during the band’s nearly 30-year career, Linton and current vocalist Jim Adkins (who is actually not the “Jimmy” in the band’s name) were able to perfect the guitar heroics that we all witnessed at Avondale. It also probably helps that Adkins’s showmanship was fueled not only by the ferocity of his punk background, but by the heavy/hair metal songs he initially learned on his instrument.

Like Dashboard Confessional, Jimmy Eat World catered to the older fans as most of us grew up with their three classic albums (the aforementioned Futures, 2001’s Bleed American, and 1999’s Clarity), and as we all know, millennials dig nostalgia.

After galloping through the first eight songs of their set with Adkins stopping occasionally to quickly, but effusively thank the audience, the rest of the band exited for him to play an acoustic version of “555.” This tune and the following song, a soaring rendition of “Hear You Me” represented the same emotional peak that Dashboard achieved earlier that night with “Stolen.”

The best string of songs came at the end of Jimmy Eat World’s set as they played some of their most popular and endearing songs (“A Praise Chorus,” “Sweetness,” and “The Middle”) as the crowd sang and jumped jubilantly. Knowing the encore was waiting, the band kept us waiting only five minutes before returning to end the night with “23,” the closing track of Futures, bookending the set quite nicely.

Chris K. Davidson is a writer in Birmingham. He sings in the band Waterwells. Photos by Andrew Wade.