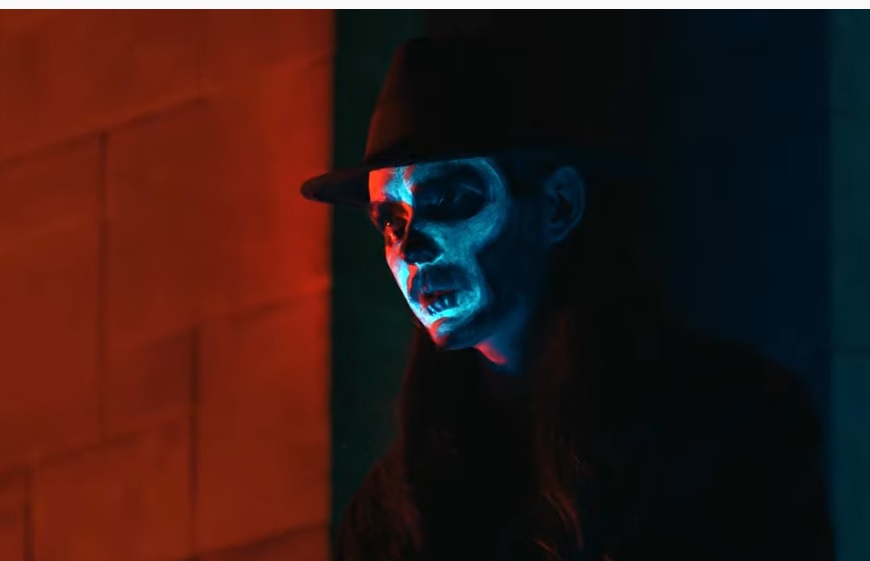 This is the season for ghost stories, and troubadour Ramblin’ Ricky Tate delivers with “The Witch,” a tale of graveyard cavorting and bewitched consorting.

“The inspiration came from a few years back in a graveyard in Milwaukee, partying with some friends,” says Tate. “We danced under the moon like we were under a spell, and I suppose the memory stuck with me.”

To accompany the new song, Tate called on Jordan Hudecz of O’Lantern Productions to direct an appropriately eerie music video. Under the crescent moon, a man of ghostly pallor recounts a hair-raising nocturnal encounter, and we’re led from the familiar comfort of a downtown pub to a fireside dance. Vividly chromatic glimpses of the storyteller and some other deft effects add a supernatural air to it all.

The song strides along in a spirited if not haunted Western fashion, thanks in-part to the addition of trumpet by Tommy Bowen and careening pedal steel by Anthony Sutton. Steven Bate handled standup bass while Tate multi-tasked with vocals, guitar, banjo, mandolin, melodica, and drums.

Tate’s songwriting often benefits from trimmed-down production with little more than a guitar and vocals, but “The Witch” and its video demonstrate how grand a scheme he can pull off when he expands the cast of characters. “I’d like to thank the actresses and all the folks who helped make the video a reality,” he says. “Huge thanks goes to Lou’s Pub for letting us film!”

“The Witch” was recorded by Shane Hopson and mixed/mastered by Dave Polster of Well Made Music.

The song is available on Spotify. It would make a fine addition to your Halloween playlist.