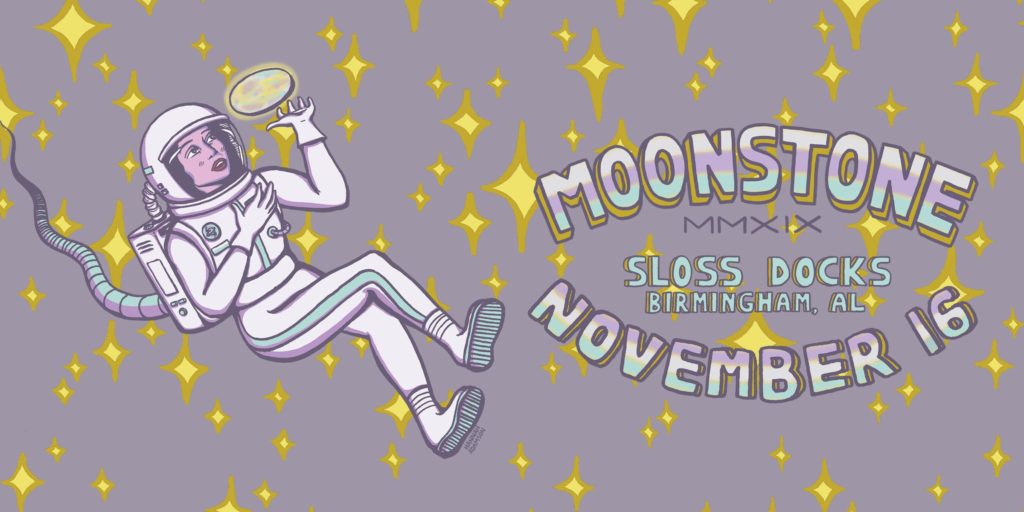 Saturday at noon, Moonstone Festival will open its gates for the first time, but it won’t be your average music festival. Moonstone Fest has a very important purpose.

Moonstone is a festival organized by women to empower and promote female musicians, featuring headlining acts like Warpaint, Sunflower Bean, Waxahatachee, and a variety of other female artists and vendors.

“A couple of years ago I wanted to do a festival, but the concept wasn’t quite where it is now.” festival organizer, Lauren Elizabeth, says. “I believe in timing. I believe timing is everything and everything happens when it’s supposed to. So, even though it had been a thought two years ago it wasn’t until December of last year that it felt right. Everything just felt right about it.”

The festival isn’t just about promoting female artists in the Birmingham area, but a push for more inclusivity in festivals everywhere where women oftentimes don’t make it onto the list of headlining acts.

“I just feel myself naturally gravitating towards female artists who need more of a highlight that I don’t necessarily think that they’re always given,” says Lauren. “Some of the larger scale festivals, while they are trying to be inclusive, you can really see the difference in the acts in how many include women and how many don’t and how many of those women are headlining, usually not. I think that a lot of festival organizers are trying to step that up and do their part.”

Moonstone is doing a lot more than just promoting female musicians. With an all-female crew of organizers and an impressive lineup of female artists and vendors, Moonstone is pushing for women to be included in all areas.

“That’s another note to take from this festival. This festival is so much more than even just the music lineup, which I’m super proud of, but it’s more than that. It’s our artists, our vendors, our nonprofits that have partnered with us. It’s about an empowering event and just supporting women and supporting their crafts and their art and their passion. Hopefully inspiring other people to follow our lead if they so desire. We really want to showcase that more festivals can exist and have more women involved even on a different level outside of the music.”

“I’m just really happy to have this platform to be able to do this, I’m super thankful of my team. We’re all volunteer based, and everyone just really had their heart in it,” Lauren says. “Really everyone has worked so hard on this.”

Another important aspect of Moonstone Fest is its partnership with Girls Rock Birmingham, a nonprofit organization that hosts a five-day summer camp for young girls. At camp the girls learn to play instruments and attend workshops on topics ranging from self-promotion to self-defense. A portion of proceeds from the festival will go to support their 2020 camp.

“Whenever I was seriously planning for Moonstone, I knew that I wanted to have a nonprofit,” says Lauren. “With our message and concept it was kind of a no-brainer to include Girls Rock. Pretty much everything that they’re doing is really just to make sure the girls have the resources that they need.”

On top of their donation to the organization, Moonstone will have two acts from Girls Rock open up the festival at 1:00.

“I really wanted to contribute anyway I could, and a step up from just benefiting was having them actually involved,” says Lauren. “A lot of people locally know Girls Rock, but we have people traveling or maybe just some people here who aren’t so familiar, so they actually get a visual and see the result of what Girls Rock does. You have these young girls, in formation, playing in a band and I’m really excited to see their performance. Their work has been good work and that’s something that me and the whole Moonstone team can really get behind.”

As for the future of Moonstone Festival, “Overall for next year and moving forward it’s just about growing and having more artists play,” Lauren says. “With the same concepts, we hope to grow and learn, and we can include more things and have more things. That’s really what our goal is.”

Moonstone Fest will be held at Sloss Docks Saturday, November 16. Gates open at noon and the Girls Rock Birmingham showcase will kick off the festival at 1 p.m. For a full lineup, set times and list of vendors check out the festival’s Facebook page. Tickets to the festival can be purchased here.