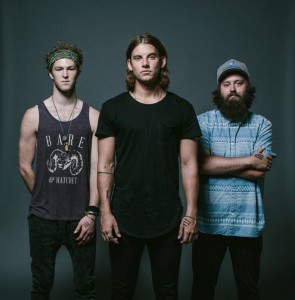 Today’s culture might believe that folk music is a thing of the past, but Judah & The Lion displays this unique genre is alive and well with a modern and upbeat twist. The Nashville band first got their start in 2011. Since then, Judah & The Lion has released an EP and full length album including Sweet Tennessee and Kids These Days. The band is composed of Judah Akers, Brian Macdonald, and Nate Zuercher. While on tour with Ben Rector, the folk band has stopped once again in the Magic City. Brian Macdonald has taken the time to give an inside scoop about the trio’s history and experiences in the music industry.

You credit Belmont University and Judah’s request for a banjo player for bringing the three of you together, what were your first impression of each other?
We connected right away just because of similar passions and upbringings. We are all pretty easy going so it didn’t feel weird at all. With that said, it was very random for us to be playing together. With the exception of Nate and I having a class together, we all had very different schedules and lives while we were at college. Even pretty different friends groups. But it was meant to be, and there’s no stopping that!

At what point did you officially decide to create a band together?
We started practicing so that we could record. I would say it became official during that process. We really began to take seriously how we were going to release the music and start playing shows. It all happened in that period before we started recording. We loved the sound we were coming up with, and the three of us believed in what we were doing, we wanted to turn it into something rather than just being another group of people recording songs.

How would describe your music? What artists inspire you?
We like to call it folk-hop with some rock and roll. Artists that inspire us run the gamut. 50 Cent, INXS, R. Kelly, Foo Fighters. . . Punch Brothers, Switchfoot, Etcetera.

Folk music is a unique genre, how did you all discover your connection with that type of music?
Partially because Nate and I had just picked up our folk instruments, that was very inspiring to us at the time. I got very inspired by my trip to Ireland learning about their folk music. Nate is from Colorado and he really introduced us to a lot of great bluegrass. Also, initially Judah was really inspired by the authenticity of folk instruments, so adding them to the sound was a great choice. Since then we have been blending in a lot of other influences, but the mandolin and banjo still have a key role in identifying our sound.

You say you have similar stories and philosophies that brought and keep you together, explain that for our readers.
We all grew up in different parts of the country, which makes us very different in a lot of ways. With that said, we all have similar values and directions for our lives which is key when starting a band. . . otherwise things tend to fall apart. We all want to maintain a music career and be able to focus on family later in life, which can be a hard thing to balance based on what we’ve seen in other bands. We will inevitably fail but we want to make it a priority to try our best to balance the two. Also, from a vision standpoint we all want to send a positive hopeful message to our audience. Not that we don’t have somber moments, but for the most part we want people to have fun and be joyful listening to our music.

What inspired your latest album? Do you have any favorite songs?
Our latest album, called Kids These Days, was inspired by our live show. We wanted to put songs on there that people could really connect with at a live show. There a lot about taking life in the moment, and valuing the simple things in life. My favorite song is probably “Water,” but that’s a tough question because everyone has different opinions AND they change a lot. . .

Explain your process behind making music, from songwriting to your time in the studio.
It’s changes a lot from song to song, record to record. One of my favorite ways to write is when we can just jam on something and take time to mold it into a song. Sometimes we get to do this during soundcheck. Other times we will have a concept or theme for a song and we will go from there. Or other times we have an instrumental part, and we add to it from there. For our new record a lot of the songs started as our producer Dave Cobb or Spencer making a drum beat, and we totally built the song from that.

How would you describe your journey as band from the beginning to where you are now, on tour with Ben Rector?
It has all happened very fast and every season brings new change for us. You never can predict what is going to happen with next. That’s the nature of being in the music industry, and it makes things exciting.

How has touring been with Ben Rector, what is the dynamic like?
It’s been great. We are really thankful to have the opportunity to tour with him. It’s been great getting to know Ben and his band and crew. One of the highlights is our heated games of Spikeball when we have some free time.

What has been the most unexpected or surprising thing you’ve experienced on your journey as a band?
I think it’s just fun when we get to play with people or bands that we have really looked up to for a long time. . . It’s just a really amazing feeling. We got to do that with Switchfoot for a show back in August. It was so cool to get to know them from that perspective.
What are some of the first things you all do when the lights go down and the concert finishes?
Right now, touring with Ben, we immediately pack up all of our gear and put it into our trailer. After that we get a little chance to chill and usually go eat dinner. Then we usually love spending time hanging out and meeting fans once the show is finished.

What are some dreams or goals for your band in the future?
We’re excited to dream of ways to make this band bigger than just our music and our live shows. I’m excited to find ways that we can give back using the band’s platform, whether it’s through a non-profit or a coffee shop. We all have dreams like that for the future. It’s hard not to put a goal on there like ‘tour with this band’ or ‘play at this venue.’ We’ve realized that when those moments come, they are totally unfulfilling. Our biggest dream might be to never lose our spark when we play and to have time for our families in the midst of the chaos.

Can you give any hints or teasers about what the new album that will drop early next year will be like or what your fans can expect?
I would say we added ample opportunities to dance, and also to rock out. Also, be ready to hear some electric guitars and group raps.

While the down-to-earth band started off at very different places, it is clear Judah & The Lion were predestined to create lively and fun music to show that folk-pop has a distinct place in the music world. They are an unforgettable folk music force that has a very bright and exciting future ahead, with fans eagerly waiting to see what’s in store.