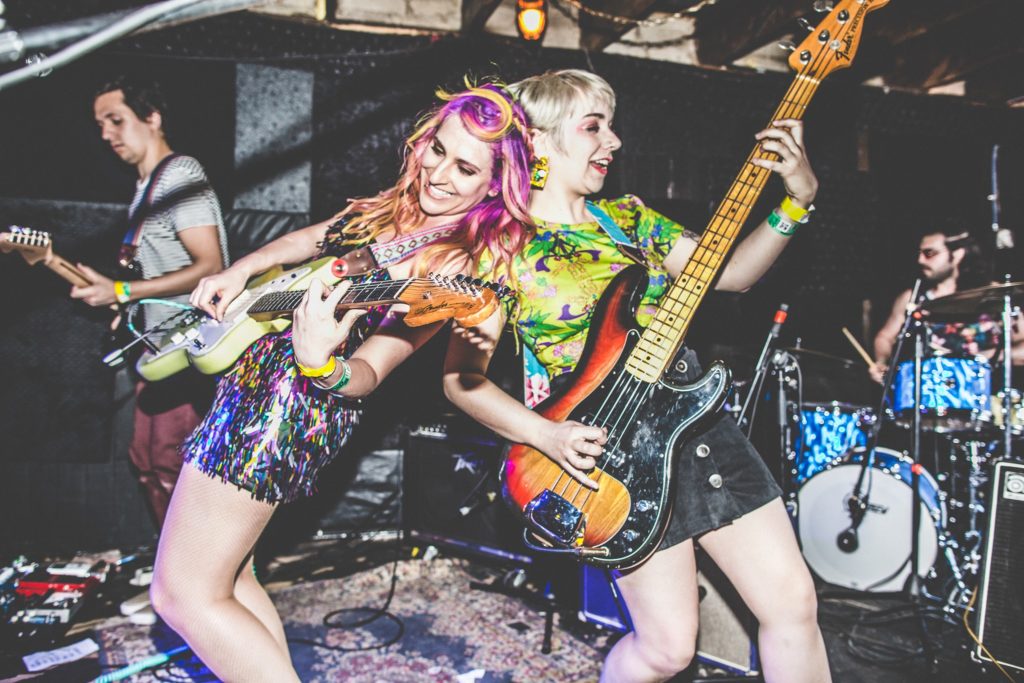 Surf’s up at Trim Tab this Friday, when New York rockers High Waisted come through on tour. Hailing from Manhattan’s Lower East Side, the high-energy surf/garage act is aggressively busy as summer bleeds into fall, with three new videos out now, a fresh record releasing in October, and a cross-country tour.

Frontwoman Jessica Louise Dye’s lyrics are delivered like brass knuckles in a silk glove. Much of her guitarwork comes across with single coil jangle, and influences like The Ventures shine through with reverb-rich riffs. Jono (Bernstein) accommodates with seemingly endless takes on the classic surf rhythm. Andrea Scanniello provides bass to anchor the act with some garage rock sensibilities, and Megan Talay handles lead guitar duties in dexterous Dick Dale fashion.

Dye’s vocal range corresponds to a revolving door of attitudes. Like Jekyll and Hyde, she can alternate between bright, clean tones; soft, dreamy melodies; and angsty punk snarl. The tracks from their full-length album On Ludlow address a broad spread of themes, from the requisite breakup song to good times in strange places, all while never drifting too far away from their psychedelic indie vibe and deceptively cheerful tone.

The band has also committed a collection of covers to record, pouring their love for their inspirations into a series known as the Acid Tapes. With The Acid Tapes Vol. 4 coming up on October 18, Dye and company plan to deviate from the established retro-focused trend once or twice. “There are gonna be some surprises from the pop genre,” she says, “a couple of more modern tunes mixed in.”

Several covers from the previous volume have recently received accompanying music videos, complete with hypnotic visuals by Jono. Songs by The Turtles, The Flirtations, and Mazzy Star all receive their signature surf/garage treatment. “We compiled a long list of songs we love, and chose songs that would challenge us and that we could make our own,” says Dye. “We wanted to break them apart and see how they tick.”

The initial Acid Tapes were the product of some footloose experimentation on the road. “We had a house party the night before, and were still coming out of it all the next day,” says Jono. “We found a tape upstairs in a friends house, so we threw a mic over a chandelier to see what would happen.”

“The recording process has definitely evolved since then,” says Dye. “We want to keep it honest like the live stuff while putting a lot of work and love into it. We like challenging ourselves.”

The band will be joined by some familiar faces, as Nashville’s Reality Something returns to Birmingham. You may have previously seen them in Avondale, playing at The Firehouse or at last year’s Secret Stages festival. Fronted by Elena Franklin, the indie rock outfit makes for a perfect pairing. “We have some mutual friends, and we played a rooftop gig together once in Brooklyn,” says Jono. “When it was time to go on tour again, it was really easy to work out these co-headliner events.”

High Waisted, Reality Something, and DJ Hollywood will play at Trim Tab Brewing starting at 8 p.m. on Friday, September 20. The brewery is located at 2721 5th Avenue South, Birmingham, Alabama 35233. This free show is brought to you by Barbara Jean Sound Machine.