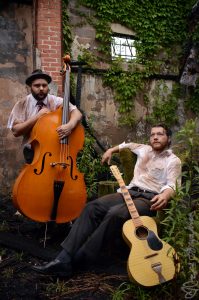 Every now and then as a music fan, you come across a voice that just doesn’t seem like it should be coming out of a person–in a good way. Whether it’s because the voice doesn’t fit the body (like the Appalachian drawl of Bob Dylan’s early career) or because the voice doesn’t fit the species (like say the mature work of Tom Waits) the effect is the same: amazement. This is what I felt when I first saw Early James and the Latest (opening for Wilder Adkins at Saturn) at some point mid-2017. An old, raspy, ancient voice had seemingly taken possession of a millennial white male’s body and somehow convinced an upright bassist (Adrian Marmolejo) and a sometimes drummer (DeVonte Hutchens) to join him in hawking a kind of sick, otherworldly blues-jazz concoction to the Birmingham, Alabama area and beyond.

As I was driving around listening to Birmingham Mountain Radio recently, I was fooled again. The jockey was apparently playing an exotic but dusty old paranoid blues tune featuring a voice from over a century ago, but all too well recorded. I knew I would have to hear it again, so I busted out my trusty Shazam! which brought up exactly nothing. Luckily, the announcer let me know it was–you guessed it–Early James and the Latest, playing the six-minute epic “Tin Foil Hat”: a groovy Malagueña-like blues vamp with a narrator holding forth about a certain post-apocalyptic nightmare of his own creation. After hearing the tune, I asked Magic City Bands to put me in touch with James who told me quite a bit about recent group shows, his musical background, and the group’s expected trajectory.

The past year has been busy for James and Co. Perry Brown of Fire Mountain, a kind of mentor for James over the years, landed them a gig opening for James Damore. Since then they’ve opened for him another time, Jerry Douglas Twice, once for the guitarist of Pavement, and four times for St. Paul and the Broken Bones. They’ve even played Americanafest. The group is working with High Road Touring with touring as their top priority, and earlier this year released their first EP (which is available on Spotify and Apple Music). With a year like that, we can all look forward to a promising future for the group.

Digging into the development of his style, I had to ask James about the other thing you notice when you’re done noticing his voice: that guitar style. Deeply rhythmical and percussive while also containing colorful bursts of movement, James could obviously make it work as a solo-guitar virtuoso gig if he wanted to, a la a kind of rusty Phil Keaggy. But James not only aspires to but has his feet firmly planted in the garden of great songwriting, where great guitar work compliments rather than distracts.

The big guitar sound is a holdover from James’ early days, when he was still flying solo: “I guess a lot of it came from the fact that I didn’t have anyone to play with,” James says. “It was just like a formative thing where I need to learn how to get the most out of this because I’m trying to make money and I need to be able to make as much noise as possible. […] I was too antisocial at that time to even put in the effort to try to form a band.” Although he admits that the first person he heard slap a guitar was Jack Johnson, James admits to having studied the fretwork of Mississippi John Hurt, Chet Atkins, Jerry Reed, Roy Clark, and lots of other 50s guys.

As for the voice, the big confident sound also grew out of certain introverted tendencies: “In a lot of ways I say things in my lyrics that maybe I can’t say as a person because maybe I’m too much of a coward to say it.” Like other great voices, James found a liberation in the artifice of creating a newly authentic, exaggerated voice: “I just had a lot of trouble singing with a clear voice. I always hated my speaking voice as a kid. I just hated that I could hear Myself in my singing voice.”

Like with guitar, James has studied and taken little pieces from other great crooners. “A little Howlin’ Wolf or Tom Waits. I even like Robin Pecknold’s voice from Fleet Foxes. Hank Williams or Frank Sinatra or any crooner. Even people like Satchmo. Or even singing really low like Chet Baker, being able to pull off subtleties. A standout influence has been Fiona Apple’s last album, The Idler Wheel…, released in 2012, which combines her classical crooner chops with a lot of bizarre instrumentation: ” A lot of the newer stuff is going that direction. Just a lot of dissonance and her melodies, I’m still obsessed with her. It’s definitely one of my most listened-to albums.”

The spirit of this kind of eclectic experimentation mixed with common sense plain-speaking is a through line in asking James about anything, whether it was his small-town-Alabama upbringing or the band’s future prospects. The group is currently fooling around with trying to incorporate fiddle player Christian Ward, who’s played with the Punch Brothers, into their live sound. Whatever direction Early James and the Latest ends up taking in the future, as long as James is at the helm it will ultimately be an act that has to be both seen and heard to be believed.