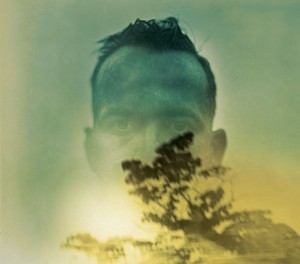 Fans of Johnston’s previous three records will immediately notice the expansion of his instrumental arrangement. A sizeable departure from past works like 2009’s It Sings Because It Has A Song, Johnston’s latest effort features full-bodied accompaniment, including distorted guitars, drums, pedal steels, and an assortment of other sounds. Background and harmony voices also permeate the 10 track record.

Rabbit Runs A Destiny features contributions from musicians that have never worked with Johnston before. The creative experimentation resulted in another step forward for Johnston, as the album sounds incredibly strong, but never overwhelming. The extra instrumentation adds a new dimension to Johnston’s songs, going beyond the traditional acoustic singer/songwriter format.

The album also benefits from the direction of producer Armand Margjeka who, with a team of engineers and other professionals, realized their vision of a much bigger sound. Production and mixing throughout the album sound fantastic, and Johnston’s songs are thoughtfully expanded into rich, echoing displays of talent and coordination.

Johnston’s voice is well suited to the soulful roots/rock feel of the album. His vocals consistently reach from mid to a higher range. There’s a near-wistful quality in his voice, which communicates sincerity in his overall delivery.

The album opens with “Heart is Breaking,” a tense, ambient track that keeps beat with a steady, distorted pulse. Line repetition and the unstoppable bass stomp lend a sense of urgency to the song. Vocal harmonies in the chorus round out the opening track and make for an entrancing greeting from Johnston and company.

Up next is the title track, “Rabbit Runs A Destiny.” The song kicks off with upbeat drums and Johnston joins in, painting the picture of a rabbit chase. The song proceeds as a straightforward rock venture. Guitars are coated in fuzz, and the bass thumps along reminiscent of ‘60s psychedelia.

The slow numbers let the mind ruminate over Johnston’s words. His assembled team of musicians did a fine job of bringing out those raw feelings. “The Wait” rises out of a forlorn verse into an emotionally cathartic chorus. Accompanying vocals will certainly stir sentiments when the song hits its stride.

“Storms” allows Johnston to revisit his familiar singer/songwriter format, with an acoustic guitar front-and-center. The track is bare compared to the majority of the thoroughly produced record, with only  a few ambient effects to accompany the singer. It’s a sweet song of comfort with a live, intimate music room feel.

Instrumental exploration and intelligent production makes Rabbit much more than a standard singer/songwriter venture. Johnston’s decision to take Margjeka and others along with him on this latest recording has led to his most elaborate and finely orchestrated album yet.