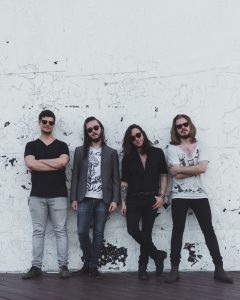 Swanky Tiger–hailing from New York, New York–are a band in touch with the spirit of fun, sleazy, 1980s hard rock. But much like current rock heavyweights Queens of the Stone Age, the group manages to incorporate the best elements of an older rock sensibility while still sounding contemporary, living, and vital–never like a mere tribute or museum piece. A few days ahead of their show this Wednesday at The Nick Rocks, I interviewed the band by phone as they found themselves in the midst of a hotel-stranded food hangover.

DD: So I listened to your new EP and I really like it. Part of what I like about it is that there are all these hard rock sounds that I feel in the 90s–with grunge and indie rock–kind of got erased. And I feel like you flirt with those like glammier sides of rock music. Or maybe not even glam but like Guns N Roses, I hear a little AC/DC scratchiness in Oliver’s voice. Can you speak to that difference in sound?

ST: We love that stuff. Definitely love Guns N Roses and AC/DC. Big ones for this EP for sure, you kind of hit it right there. I don’t know… we’ve always loved the kind of glammy stuff, you know?

As far as the difference, and not hearing those sounds in other bands, it’s more of a coincidence or consequence. That wasn’t necessarily something we tried to make sure we did.

DD: So it was just a natural outgrowth of your sensibility.

ST: Yeah it just kind of came out that way. I guess since that’s just what we like to listen to, you know? And our whole MO with this band has always been kind of like: “Huh, what record do we want to hear that we can’t find?” You know? 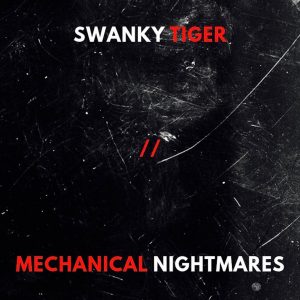 DD: So Mechanical Nightmares, this new EP. It’s fun but also, especially the title track, it seems to be laced with a kind of paranoia. And so the name, it sounds like technological paranoia in a way. But is there any other kind that got in there? Or am I just reading that into it?

ST: Interestingly enough, I did the lyrics while I was waiting for the subway in New York. And I was just really pissed off because I hate the subway and it was taking a really long time. And so I’m just kind of writing it down in my notepad. And then what happened, interestingly enough, is like–I wrote the lyrics all over a year ago–and then all this crazy shit happened with the election and all this–the big upset and all of that–and, it’s very interesting. Because when this came out, it sounded really topical, from way before when all this stuff ever happened! So maybe there was foreshadowing or something there. But… it was just about me being angry at that subway train! So…

DD: Gotcha. No, that’s fine. So, on your website you list influences like Queens of the Stone Age and Iggy Pop, stuff like that. For the new EP did you feel like there were new influences? Or even outside of a comparison to another band or artist, was there another particularly different direction you wanted to go with this EP? Or was it all just a natural development?

ST: Yeah I think so. Especially in the way we did our guitar tones, all our gear being different, we wanted to make a much tighter, more hard rock album than we ever had before. So like a lot of those sorts of throwback bands were a bigger influence with us for this record. Compared to like the garage rock we did on our first record.

DD: Another thing I noticed when I was poking around on your website and looking at responses elsewhere to your music, there was a lot of singling out of your live presence. When you play live, do you really try to change it up, or is there more of a focus on recreating the studio sound in a particularly charismatic way?

ST: Well there’s definitely a very conscious difference in arrangement. In the studio, we look at the whole band as an infinitely variable instrument. You can have ten guitars doing different things on the record. But live you’re going to need to figure out a way to mix that down. So it is kind of trying to emulate the record but also conscious of like, we usually only go in with half of a setlist in mind, but also we try to keep it as party as possible. Read what the audience is doing and hope that they respond to what we’re doing.

So we’re taking the EP sound as the guideline, as the general grid and story of the song and then live we feel how the venue is vibrating with us, how the audience is feeling, how we’re all feeling on stage. If we want to extend a solo we just extend it if we feel it in the moment. Or we find some segue ways into songs and combine different things. But always with that EP sound in mind, I guess. That’s always the place we like to take off from or go back to. It’s usually just happening in the moment.

So we can’t really recreate what we do in the studio because we don’t have the personnel to do it live… especially on this EP we had tons and tons harmonies and keyboards and stuff. And we don’t have backup singers live and we don’t have a keyboard player. So like when we play live we try to make up for it in stagecraft. So we’ll like jump around and extend solos and such. But it’s always like reading the room.

Swanky Tiger will perform at The Nick on Wednesday, July 26, at 10 p.m. They will be joined by 7 Stone Riot and the Chris Simmons Band.

Image and video courtesy of Bread and Circuses, Inc.