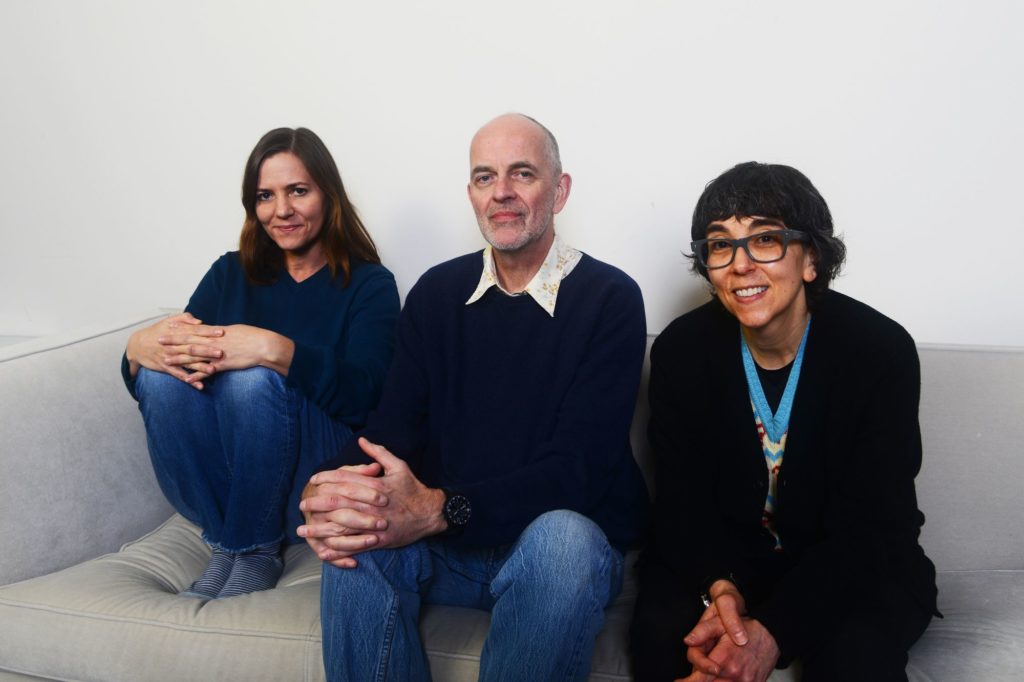 Two members of the Boston indie-rock trio Blake Babies (Juliana Hatfield and Freda Love Smith) will be touring together this month. Hatfield will headline with her solo material and Smith will provide percussion as part of Sunshine Boys, a Chicago-based group which also features Dag Juhlin and Jackie Schimmel.

The tour stops by WorkPlay on Sunday, January 19. We spoke with Smith about the genesis of Sunshine Boys, the recording of their upcoming sophomore record, and Smith’s connection to Birmingham.

Chris K. Davidson for Magic City Bands: How did Sunshine Boys get started? Are you all based in the same area?

Freda Love Smith: Yeah, we’re a Chicago-based band. Even though people probably associate me with Boston because of Blake Babies and we lived there for a long time, I’ve lived in the Chicago area for almost ten years now. Pretty soon after I moved to town, I started going to shows and seeing musicians here. I met Dag Juhlin, who plays in Poi Dog Pondering and also has this amazing local cover band called Expo 76, and we instantly hit it off. We had a lot of friends in common, and in the course of chatting and getting to know each other, we realized that his band The Slugs actually opened up for Blake Babies way back in the day at Lounge Ax in Chicago. I think it was around 1990. So that was a cool, small-world thing.

Around that same time, I met Jackie Schimmel, who plays for a lot of bands locally including a fantastic kids’ band called the Justin Roberts Band, and they’ve been nominated for a couple of Grammys. People with kids’ are probably more likely to know them, but they’re a very cool kids’ band. Really high quality, great songwriting, amazing musicians who tour around a lot. Jackie and I have a lot of friends in common as well. She used to be in this big power-pop band in Chicago called The Big Hello, which Brad Elvis was in. Just a lot of points of connection between all of us. We’ve all been playing music since the 80s.

At one point, a mutual friend of ours asked us to back him up as a band and pulled us together to play a couple of shows with his band. At that point, Dag, Jackie, and I realized that we really connected musically, so Sunshine Boys grew out of that. So we split off from that original band, and the other guys split off and formed their own band called The Last Afternoon. So that original band ended up breeding these two other bands.

We then played our first show as Sunshine Boys near the end of 2016. We put out our first record, Blue Music, out in 2018, and we’ve just been steadily working since then. We’re releasing the new record in May 2020. And the first single just came out.

MCB: I saw you came out with an Indiegogo campaign for the new album. Have you used those types of platforms before?

FLS: It’s still a very new world to me, but we did PledgeMusic for our first record, and it worked great. It was fun. I like having the more direct interaction with people, and we were able to fund the release of our record. We just launched the campaign. The really fun thing is all the perks you can offer. For us, we’re doing things like having drinks with the band. We even have a perk where we’ll come over and make dinner for you because we’re all really into food, and I actually published a cookbook a few years ago. The creativity and the direct connection is really fun. But it’s learning curve, for sure. I’ve worked with a bunch of different record labels, and I’m used to turning over a lot of that labor to a label. But they don’t always do the greatest job, so I don’t mind being responsible for more of that stuff.

MCB: Is the writing process between the three of you pretty collaborative?

FLS: It is, but it does start off with a really strong idea from Dag. As the guitarist, lead singer and primary songwriter, he brings fairly fleshed-out ideas into practice, but we do work a lot together to arrange the songs. Jackie, in particular, actually went to music school and has a really good foundation in harmony and structure. She brings that to the songs, and we end up working through them a lot together. It’s a pretty seamless process where we’re very cooperative and collaborative. We tend to agree on these kinds of decisions. It’s been smooth and harmonious so far. I’ve been in bands where that hasn’t been the case, so I’m incredibly grateful for that.

MCB: Are the songs for this upcoming album all new compositions or were some left over from the first record?

FLS: There’s nothing left over from the first record. I think pretty soon after the first record came out, Dag started writing immediately and has been steadily productive ever since then. He’s still writing new songs, I think.

MCB: What was the process behind the first single, “Infinity Girl”?

FLS: Dag brought that in as a pretty realized demo. The only tweaks that happened in the process of band practice and arrangement were figuring out the rhythmic feel for it and figuring out when to lay off or come in really strong. I see that song as kind of an anthem, a superhero. As a drummer, I kind of drew inspiration from the Batman theme, though I’m not sure anyone would necessarily pick up on that. On the chorus, I’m dotting to the drum part of the classic Batman theme.

One thing we really like to play with are the dynamics, and Jackie’s really good at suggesting when we come in, when we pull out, when we stop, and when we come back in together. Because it’s such a short, snappy song, we definitely had fun experimenting with the arrangement.

MCB: Do you guys have your own studio space for recording?

FLS: We’re kind of all over the place, but it was really interesting for this record. I work at Northwestern University as a faculty member in the Radio and TV Department. We have a really great Master’s degree in Sound Arts, and that program has a beautiful recording studio. During the school year, it’s really crowded and busy with student projects and classroom work. But during the summer, it just sits there. So I booked us over the summer to record there. It was really fun and surreal for me to be working on a rock project on the campus where I work as a member of the faculty. We were able to bring our engineer, Matt Allison, in there and we also hired a Northwestern graduate student to work as our studio assistant. So for me, it was an interesting to bring the two worlds I live in together.

MCB: The band released a Christmas single as one of its first recordings. How did that come about?

FLS: That was an old piece of music that Dag had been working on. It was something he had done for a radio station that he always meant to come back to and flesh out and finish. We had just finished recording our first record and thought it would be fun to come out with a Christmas single. He finished it up and we recorded it in the summer. So every year, we try to promote it and share it with our friends. Usually each year, we have one gig where we can play the song. It’s nice to have an original indie-rock Christmas song in our repertoire.

MCB: Since [Blake Babies guitarist] John Strohm lived in Birmingham for a while, I imagine Blake Babies have probably played here a fair amount over the years. What have been some of your favorite shows here?

MCB: It probably was City Stages.

FLS: That was beautiful. Pete Yorn was on the bill and it was really big. Blake Babies played and we walked around Birmingham and went out for a couple of drinks and saw a bunch of bands. It was just a really beautiful night and magical.

Sunshine Boys will join Juliana Hatfield at Workplay on Sunday, January 19. For more information and to purchase tickets, visit workplay.com.

Chris K. Davidson is a writer based in Birmingham. He is also in the band Waterwells.