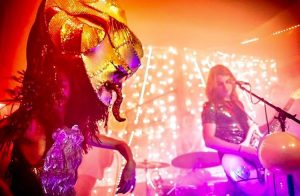 This Saturday, psych rockers/interstellar travelers Spaceface return to the Syndicate Lounge. The Memphis act is bringing a new album’s worth of songs, along with some upgrades to the DIY visual display that shines its way through the music. It’s good vibes, great music, and an experiential feast for the senses.

Frontman Jake Ingalls (The Flaming Lips) is happy to return to Birmingham. “Since last we came, Spaceface has toured all over, the Lips have released a record and we’ve been touring on that,” he says. “It’s kind of a blur, actually.”

It’s hard to say what you should expect from the band’s ever-evolving performance, but do listen out for songs from their upcoming album, Sun Kids. The album follows two EPs and three years of touring, with gigs at SXSW and the Hangout Festival. 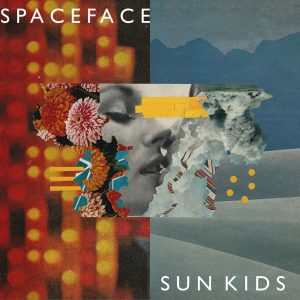 Set to release in April, Sun Kids will represent the vibrant nebula of sound and tone that Spaceface has formed- fuzzy guitar grooves, trippy vocal layers, waves of bright indie rock and cool breaks. “We went into the whole process knowing we wanted to mellow out a bit and create an earthy yet ethereal record,” says Ingalls. “I think we achieved a good bit of that.”

The full-length album presented the opportunity to hash-out songs and ideas that hadn’t been fully developed yet. It was a chance to experiment with the music, the effects, and the mood of each track. “Going in, I think we really wanted to polish up a few old songs that we’ve never been able to give the proper attention to,” says Ingalls. “Along with that, we talked extensively about wanting to make a record filled with sounds that you want to live between.”

The title song “Sun Kids” features the talents of Mikaela Davis, whose harp shines some angelic rays through the track. Voices singing of celestial bodies in unison recall ‘60s flower children vibes, but it doesn’t feel like a throwback. It’s a very welcome modern take on psychedelia. Ingalls and company managed to take the familiar genre conventions and still make them feel like the future.

“To us, a rewarding headphone listen is just as important as the windows down experience,” says Ingalls. “We wanted to create a record that you’ll want turn up on a sunny day in the car, as well as put on at home while you’re mellowing out.”

Spaceface has made several appearances in Birmingham already, including shows at Trim Tab and Syndicate Lounge. Crowds dug the spectacle, and the band has some fond memories tied to the Magic City. “We had this beautiful coalescence by coming in town right before Sloss Fest, so our buddies in Bright Light Social Hour and Dr.Dog were there, the entire Lips family was there too, and tons of our friends and even family showed up,” he says. “I really felt the love that night. I think we’ll feel it again.”

Even if you saw Spaceface the last time they came through, you’re bound to see something new. Along with new music, the group has been tinkering with their infamous light and sound show. New strobes and effects will complement the new pedalboard gear and expanding soundscape.

“With the way we work and have to schedule things, big changes and new tricks come incrementally,” says Ingalls. “Which is why we love coming down to Birmingham so much! We get to test our new material on you guys; Birmingham has really become a sort of gauge for us to determine what works and what doesn’t.”

Like a chimp rocketing into the depths of space, you’ll experience things yet unknown.

Spaceface will be joined by Mississippi’s Swear Tapes as well as China Gate, a Memphis act returning after a crowd-drawing performance at last year’s Secret Stages.