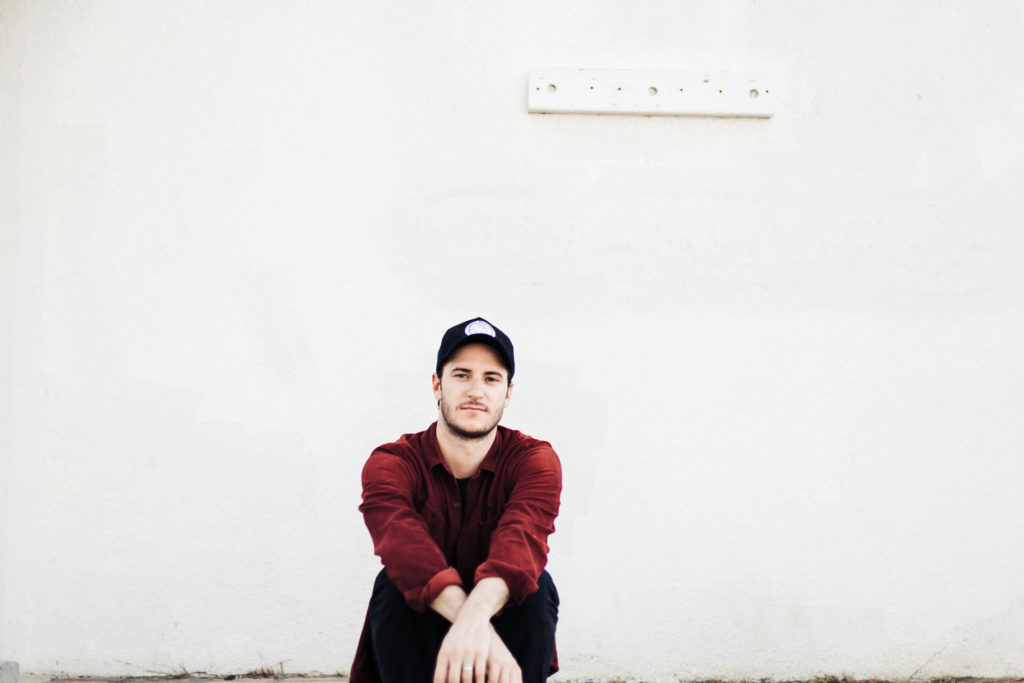 Since leaving his former band (the L.A. garage rock group, The Futures League), Scott Ruth has steadily grown his solo output with several singles and EPs of evocative Americana. Many of these releases have been produced by Seattle songwriter Noah Gundersen, for whom Ruth will open on Monday, October 28 at Saturn.

We spoke with Scott Ruth about moving from bass player to songwriter, meeting Gundersen, and the differences between American and European audiences.

Magic City Bands: How did you get started in music? Are you originally from L.A.?

I’ve been interested in music my whole life. I used to watch live performances of classic rock bands with my dad when I was a kid and was totally mesmerized by it. I thought the guys up on that stage were the coolest dudes I had ever seen. So when I was 10 years old, my uncle gave me my first guitar and I became obsessed with it pretty quickly. I’ve been playing “in bands” since I was about 12 years old, but really only professionally the last few years.

MCB: You played bass for several bands before switching gears into a solo songwriter. Is songwriting an outlet you have always had in the background, or was it something that emerged in the last few years?

SR: It’s actually the opposite. I’ve been playing guitar and writing songs for as long as I’ve been playing music. I only started playing the bass when I was about 20, because my friends were starting a band and needed a bass player. I figured how hard could it be. Turns out it’s a lot harder than I thought, but I’ve gotten pretty decent at it by now. I’ve kind of fallen in love with the instrument since. It’s further from the guitar than you’d think, and I love that it forces you to approach the music a little differently. Just happened that the first project I was involved in that saw a tiny bit of success, I played bass in, but I still have a ways to go.

MCB: How do you think your experiences as a bass player translated into or influenced the writing of your own music?

SR: I don’t know if it’s changed that much, but as a listener, I definitely appreciate the bass in any given song more than I used to. There have been a few new songs that started as bass and drums before I even picked up a guitar or went over to the piano, so I guess it has informed my writing somewhat. It’s opened doors for me to explore that maybe I wouldn’t have before.

MCB: You mention that Noah has been a mentor and friend for the last decade. How did you guys meet and what has this relationship taught you about the craft of songwriting and touring?

SR: Noah and I met for the first time when I was about 17 years old. He was touring up and down the west coast playing living rooms or pretty much anywhere that would let him play. He made friends with myself and a group of people I was hanging out with, so every time he’d come down to the area, he’d usually play a show for us in one of our living rooms. I’d usually open for him. I really sucked back then, but he was always incredible. I think watching him grow into the musician he is now has had an even bigger impact on my music than I’d like to admit. He was always a step ahead of me and someone I could bitch about the music industry to. It’s really important to have those friends in your life when you’re pursuing something as daunting and thankless as this can be sometimes. Our relationship over time has just evolved from acquaintances to friends and eventually collaborators, I guess. I’m really thankful whenever he’s around. Being a solo artist can often mean swimming around in your head trying to sort through an endless stream of ideas. It’s nice to have someone to bounce those ideas off of every now and then.

MCB: What are some of your lyrics that were the most difficult to write, yet have now become some of your favorite lines to sing?

SR: Most of them. I tend to put way too much time into lyrics… until I get frustrated and then I don’t. I feel like I’ve been cursed in some ways as a music listener, because I really, really love well-constructed lyrics. I know some listeners couldn’t care less, but for some reason, good lyrics have always been something that I have put value in. I don’t always succeed at that, but I definitely drive myself crazy trying to get them right. If I had to choose, I’d say “Feel the Same” was probably the hardest. I had my friends Landon Jacobs and Jake Berry help me with that one. That song is just very personal and I wanted to get it right.

MCB: You have toured the U.S. and Europe. How are the audiences similar and different in terms of responding to music?

SR: The one thing I’ll say about Europe is you see way less people on their phones. It’s really a breath of fresh air. I don’t know why, but they seem to still really respect live music over there. In a lot of places here, like L.A. or New York for example, you often get the feeling everyone’s wishing they were at the show down the street instead of yours. There’s just so much happening on any given night. And I’m definitely guilty of it too. But that being said, I have had amazing shows all over and like both of them for different reasons. There’s something nice about the comfort of touring in familiar places in the U.S. It’s home.

MCB: You’re influenced by two greats in songwriting, Bruce Springsteen and Tom Petty. Why do you think these musicians have endured for generations?

SR: I think these two artists and a select few others of their generation really mastered the art of crafting a perfect pop song. Take “Free Fallin’” for example. I had a realization recently that I actually love pop music. The Beatles, Tom Petty, Fleetwood Mac, even Coldplay. All these artists are pop artists, but their songs are disguised as something else because they’re written with such integrity, which we tend to disassociate from pop music. It’s a funny world we live in when we usually categorize popular music as some cookie cutter bullshit rolled out on an assembly line, but pop music wasn’t always that way.

MCB: What are you working on now in terms of recording?

SR: I have a studio at home, so I’m always writing. There’s lots of new music. Just trying to find the right way to put it out.

SR: This changes daily, I can’t even begin to construct an answer to this. Been really loving Hiss Golden Messenger lately, as well as Erin Rae. Lots of classic rock… And of course, my favorite emo records because I can never hide from my roots.

Scott Ruth will open for Noah Gundersen at Saturn on Monday, October 28. For more information and to purchase tickets, visit saturnbirmingham.com.

Chris K. Davidson is a writer and musician in Birmingham. He plays in the band Waterwells.