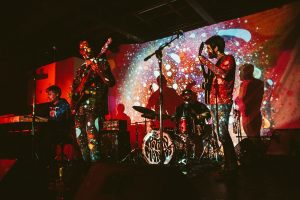 Between their Beatles-esque vocals and their faithfully trippy guitar/drum combo, The Rotten Mangos take listeners back to the Summer of Love, if the summer of 1967 occurred in present-day Austin, Texas. “I think our music will continue to change but retain its sonic identity,” says singer/guitarist Ramiro Verdooren. “We like 60’s songwriting more than the psychedelic mystique a lot of bands have nowadays, but we are definitely not a revivalist band or a throwback band. We fulfill any idea that comes out of us.”

While comparisons to Revolver-era John Lennon are well-earned, there’s much more to the group than uncanny retro vibes. The band balances pop songwriting with measured technical flourishes, and Verdooren’s observational lyricism adds a contemporary feel to the flower child flow of their music.

“The most current music was all inspired by the day to day, and I’d like to think it’s changed by the way of natural causes,” says Verdooren. “We both feel as though every experience you have or get to the other end of somehow gets reflected in the music that gets made, whether it’s a new guitar, a new living environment, the end of a relationship, the beginning of a new year, etc.”

The title track from their latest effort, Couldn’t Find a Word, expresses the songwriter’s struggle with writer’s block, searching for lyrics that never seem to materialize. The forlorn guitar riff echoes the singer’s feelings until the songs leaves the chorus behind to break out into a classically psychedelic, wandering jam.

“In Love with the Afternoon” laments sleeping the day away only to wake up and find that you’re out of time. The clean electric guitar throughout the song evokes The Byrds, and the driving acoustic strum and drum beat lend a healthy dose of energy to a song about sleeping-in. Again, the band deviates from any predictable verse/chorus structure with some surprising fills.

Instrumental excursions like “Orange Sun Silhouette” feature jangling electric guitars, tambourines, and the distinctive lava lamp bass that provided the soundtrack to so many consciousness-expanding experiments.

The band formed in 2013, in Verdooren’s hometown of McAllen, Texas. “McAllen was definitely a catalyst for playing music because of how void it was of bands and venues,” he says. “Being a band down there was a real pleasure considering there weren’t any other people in McAllen playing music from our side of the spectrum; the audiences really appreciated every show and always came out to make something fun happen.”

The musicians met as teenagers, while drummer Cristian Sigler was performing in The Peppered Moths. “I watched a few songs and was totally blown away by what they were playing,” says Verdooren. “It was the weirdest, most mystical sounding stuff I’d ever heard.” During a break in the set, they struck up a conversation and Verdooren asked to sit-in for a few songs. The two became fast friends and continued to jam consistently over the next several years.

When approached by Christian Bland and the Revelators to open their show one night, they quickly formed a five-song set and decided to make their jam group an official band. After brainstorming a long list of potential band names, the group dubbed themselves The Rotten Mangos. “I’m glad we went with it instead of Cardboard Condo or one of the other terrible names,” says Verdooren. 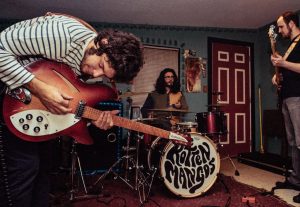 Following the show, Bland suggested that they take their act to Austin, a fertile environment to nurture their sound. “Austin seemed like a utopia of sorts to everyone in McAllen,” says Verdooren. “We’d visited countless times and it felt like where we were supposed to be, so we made the move and it’s truly been the best decision I personally could’ve made.”

Nearly four months after self-releasing their EP, The Rotten Mangos received a call from Lolipop Records, who re-released the EP with their indie label. The group’s new record, Couldn’t Find a Word, was captured on good, honest analogue equipment by Verdooren himself. Digitally distributed by The Orchard, the record was released last December.

To support the new record, the Mangos have embarked on a U.S. tour. The “Mango Du Jour” tour will stretch from Texas to North Carolina, washing a psychedelic wave across the South.

On Tuesday, January 23, The Rotten Mangos will play at The Nick in Birmingham.

Photos by by Emanuel Rozario.