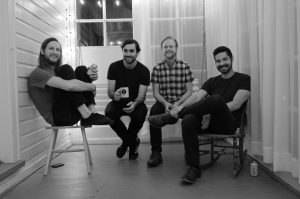 Rooted in a hitchhiking trip across America, stereotypical teenage angst, and a genuine passion for songwriting and musicianship, Emily & the Complexes prove that their sound is as intricate and thought-out as their name would suggest. What began as frontman Tyler Verhagen’s solo project as he traveled the United States with his guitar, has since metamorphosed into an indie rock fusion that is as diverse as the country itself.

Since their ofﬁcial conception in 2012, Ohio rockers Tyler Verhagen (vocals/guitar), Tom Knitter (drums), Jordan Finke (bass), and Brett Gregory (lead guitar) have carefully cultivated two albums and an EP, as well as toured extensively in hopes of gaining the recognition their music rightfully deserves.  Backing their latest album release, Baby, Get To It Before The Heartbreak, Emily & the Complexes will make their return to Birmingham’s The Nick Sunday, September 11, at 10 p.m.

Alicia Cuccia- First of all, how did you guys meet and work towards creating what is now Emily & the Complexes?

Tyler Verhagen- We’ve all been playing music together in some combination since our high school days, two of us were in one band and the other two in another. I originally started Emily and the Complexes as a solo gig, and wrote many of what became our earliest songs as I hitchhiked with my guitar around the country. When I ﬁnally settled back in Ohio, I added Tom and Jordan and later Brett to try to develop a more rock n’ roll sound.

AC- Next, are there any speciﬁc bands or artists you all listened to growing up that inspired you or have carried over into Emily & the Complexes? Or at least certain styles and genres that inspired you to make music of your own?

TV- I think the early days were pretty heavily inﬂuenced by some weird amalgamation of our pop punk/emo middle and high school roots, and the singer-songwriter schtick I’d started Emily and the Complexes as. I like to imagine there’s been an evolution since then. Songwriting will always be the heart of the project, but integrating in elements of pop, country, r&b, etc. helps keep it interesting.

AC- What exactly does “Emily and the Complexes” mean?

TV- I came up with the name years ago when I was playing by myself. I think at the time the name was representative of some conceptual songs I was writing, but since then it has kind of morphed into some moniker, more important that it exists than where it came from or why.

AC- How has it been touring behind your latest album?

We’re really excited to be hitting the road again. It’s been something like a year and a half since our last tour and we’re excited about the towns, the venues, and the bands we’ll be playing with. There’s deﬁnitely a feeling of newness and anticipation surrounding this string of shows.

AC- Why should people come see Emily & the Complexes at the Nick this Sunday? What do you offer that people won’t ﬁnd in any other band?

TV- This is our second time playing at the Nick and I think we’ve improved a lot in the interim. We’ve got a batch of brand new songs we couldn’t be more excited to share, and we’ve also learned to have more fun onstage and off. Chances are we’ll take shots- come out and take one with us!

AC- And ﬁnally, what does the future hold for Emily & the Complexes?  What are your plans both long term and short term?

TV- Short term, we’re interested in giving this record the push we think it deserves- touring to develop interest, working for exposure through both the typical 21st century avenues like social media and also good old fashioned hard work. Long term… put out another record before we’re eighty years old.

Emily & The Complexes can be found online at bandcamp, live this Sunday night at The Nick at 10 p.m. They will be joined by Future Primitives, North By North, and Sister Sniffle.

Alicia Cuccia is a writer and musician from Memphis, Tennessee.