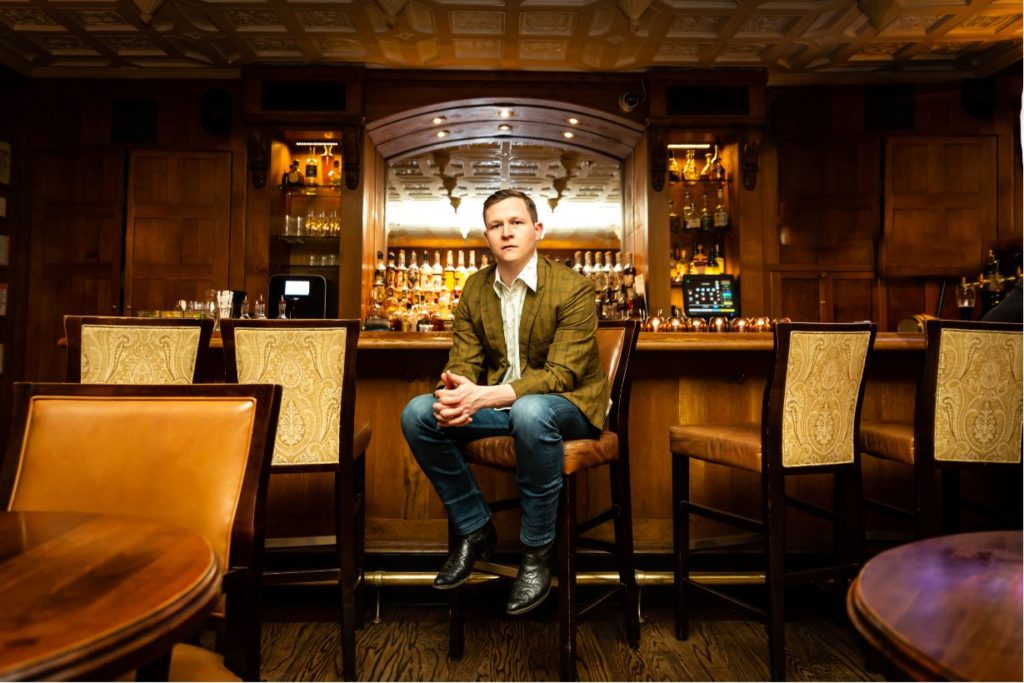 Debut albums as a singer/songwriter can be daunting. Though they might drop an introductory EP, artists want to be able to come out of the gate with a complete sonic vision that also creates a lasting first impression.

After fronting bands in his hometown of Jonesboro, Arkansas, and during his college days at the University of Alabama, EG Vines moved to Nashville at the end of the last decade to pursue his original music dreams. After a handful of records with The Bandoliers, Vines is reintroducing himself as a solo artist steeped in the influence of the region’s Americana legacy with flashes of alternative and indie rock.

With lyrics not afraid to address the darker sides of issues like racial tension and gun violence, Vines bring his songs to the Nick this Friday, October 11th. We spoke with Vines about the new record (titled Family Business), the changing of the Nashville landscape and working with producer Jordan Lehning.

Magic City Bands: Are you originally from Nashville?

EG Vines: No, I grew up in Arkansas, and I then I went to school at [University of] Alabama through 2008. I then moved up here and did the cover band thing for about a year post-college during that terrible recession we had and playing those fraternity and sorority gigs that pay way more money than I make right now.

MCB: Did you start writing songs in college or beforehand?

EV: I guess I started writing when I was about 15 or so. My friend had a band and they did mostly Metallica covers, and we were all into heavy music. I had asked if I could play guitar and then their singer flaked out on them about two days before a show, so I offered to learn all the songs and come play. I had a bunch of note cards and music stand and I went and did the show.

We just started getting together, and I found that I wanted to play music to write. So I was about 15 or 16 when I decided to do original music in high school.

MCB: You said you moved to Nashville in the late 2000s. Obviously, the city has experienced a lot of changes. What have you seen change from your perspective?

EV: It’s been changing a lot since 2013 or 2014. There’s just been a boom with people moving here. Nashville is one of those towns where unfortunately they knock a lot of stuff down. A lot of areas are almost unrecognizable. You can have 15 cranes downtown at any time building condos. It’s changed a lot, but East Nashville where I live is probably still pretty similar to how it was in 2013 or 2014.


MCB: You’ve put out several singles this year. Will those all be on the album?

EV: Yes. I guess we’ve done four singles out of the nine songs that will be on the album.

MCB: How did the writing and recording process go for this album?

EV: We did a five-song EP that came out in 2018. As soon as we finished that EP, that was probably my starting point for writing this record. I probably wrote the first song that made it onto this record in the beginning of 2018. Then we started recording in January of this year. We did a week in January, a couple of days in March. It was a year and a couple of months’ worth of writing. I had written 75 or so songs. Each one that made the record had something special that needed to be put on the record. Some of the songs had been played live and had been really favorably received. It was hard to whittle it down, but for five or six of the songs, I knew they just had to be on the record.

MCB: Nashville is known for co-writing. Did you have any co-writes on this album or were the songs strictly yours?

EV: No co-writes on this record. I’ve been in a session or two like that. I guess it all depends on who you’re working with, but I’ve heard some sessions can be pretty brutal. A couple of these songs we fleshed out in the studio, but for most of these songs, I had already finished the arrangements and melodies. For the guys who played on the record, we had a couple of sessions where we sat down with them and made sure they fit the right way. And then we let Jordan Lehning who produced the record have the final say on the sonic elements once we got into the studio.

MCB: Jordan has produced a lot of big-name acts like Kacey Musgraves and Rayland Baxter. How did you get hooked up with him?

EV: I just started reaching out to people I might want to work with. Being independent and not having a label behind you (some labels can be pretty flexible), but it’s just nice to have full flexibility. I hit up four or five different potential producers and went and had a coffee or beer with a couple of them. After listening to a few of the last records Jordan had done and then talking to him, he seemed like the right fit for what I needed.

MCB: For this album, are there any musical moments or lyrics that you are particularly proud of?

EV: It’s hard to say. I don’t have kids, but it’s like the songs are all your babies. I like to use music to communicate and I think a couple of the songs that people have really picked up on and recited back to me to say the song reminds them of something, those are probably songs like “The Salesman” and “Hate Remains.”

With “The Salesman”, you can take what you want out of it. It’s direct in places, but it’s also a little obscure. “Hate Remains” is a different song than I had written before. It chronicles the University of Alabama through history as well as my experience there. It looks back at the past moments of racial tension and how people treat each other. Those two songs both came out quickly and easily.

MCB: Are you touring pretty heavily for this record?

EV: We’ve already started touring some. Most everyone still has a full-time job, so I’ve been doing a lot of two- and three-week show runs. We went up to the Midwest a couple of weeks ago and played in Cincinnati and Lexington. We’ll go up there again for Chicago and Indiana. We hit Atlanta last weekend and a lot of the Southeast. I think we have 12 dates or so lined up to keep growing the brand until we can do a longer run.

EV: Harvest by Neil Young, OK Computer by Radiohead, Purple by Stone Temple Pilots, MTV Unplugged by Alice in Chains and A Rush of Blood to the Head by Coldplay.

EG Vines will play The Nick on Friday, October 11th, with Elizabeth Moen and Kaydee Mulvehill. For more information and to purchase tickets, visit the venue’s site.

Chris K. Davidson is a writer based in Birmingham. He sings in the band Waterwells.