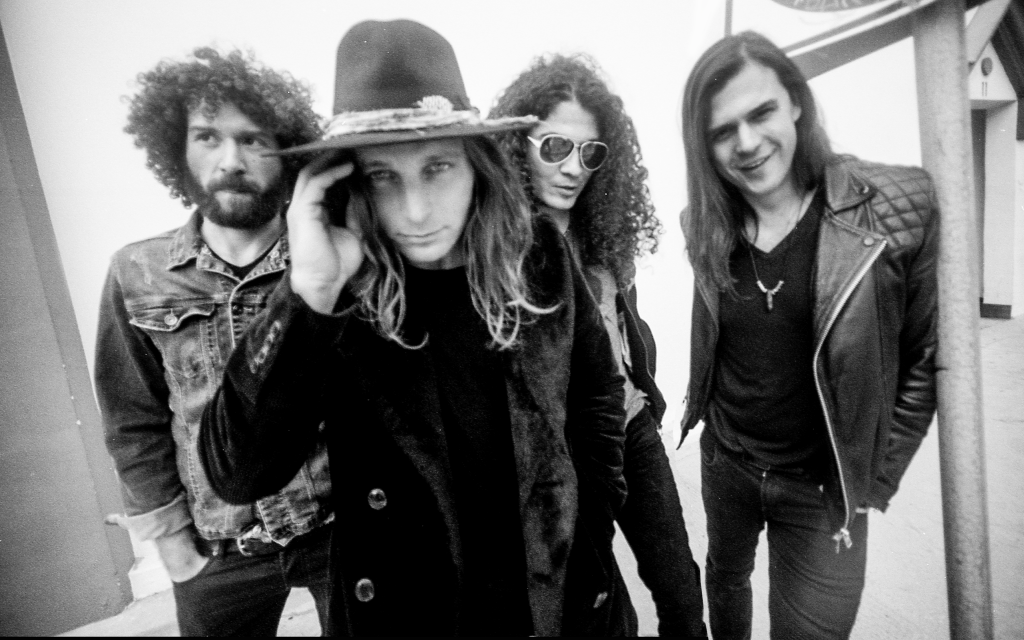 The best songs draw you in from the opening notes. Whether that comes from a scorching riff or pummeling vocal, you know the journey through the track will always pay off in the best way possible.

Los Angeles’s Dirty Honey may only have one self-titled EP under the belt, but they’re writing the songs and cultivating the fan base that will build a strong career foundation. And it doesn’t hurt that they’ve got Slash in their corner.

We discussed a variety of subjects with Dirty Honey from recording with Nick DiDia (Pearl Jam, Rage Against The Machine), meeting and touring with Slash, and whether or not “retro” is a dirty word in today’s music climate.

Magic City Bands: A simple question to start off, but how and when did Dirty Honey start playing together?

Marc LaBelle: Two years ago. We met one another playing around L.A. and started this when we felt we had the right guys grouped together. But it really started when I found John Notto.

MCB: Los Angeles is known for its extensive and decadent history of producing rock’s most well-known acts. However, with studio production tools allowing albums to be recorded in bedrooms across America, you haven’t heard as much about new emerging L.A. acts. What is the scene like these days?

ML: I don’t particularly notice a thriving original music scene, at least not with bands. I don’t listen to house music all that much so that very much could be something that’s happening that I’m completely unaware of. There’s a lot of sidemen that get together at The Whiskey or The Viper Room and perform rock covers on weeknights and those events are usually packed. There’s definitely a thirst for rock n roll again, which is good. There is a little bit of a punk scene bubbling, too.

MCB: Speaking of L.A., Slash has been a major supporter of Dirty Honey, and you will go back on tour with him this summer. How did he come in contact with the band and what have you learned from being around him?

ML: We got word that Slash was going out, and our manager submitted our music to be considered for a support slot. He and Myles Kennedy liked the tunes and threw us on a few dates. The experience was incredible. Everyone in that camp was extremely nice to us. I’ve learned a good bit from Myles just in regard to being a professional. He keeps his mind, body, and voice in tip top shape every night and sings his ass off for two hours. It was also really interesting to learn that Slash’s passion for performing is without a doubt still there. He gets pumped up for every show like it’s his first, still getting pre-show nerves even though he’s coming off one of the biggest stadium tours in history. It’s really refreshing to see his passion both for the stage and the studio.

MCB: What was the recording process like with Nick DiDia for the first EP?

ML: Nick DiDia is the man and a legend. He’s worked with some of our favorite acts of all time and he was a great at pulling the best out of each of us. He really pushed us to make the songs better and could really help pull out just the right performance and nuance in everyone to shape this last EP. He’s since become a great friend and mentor.

MCB: “Fire Away” has been a great first single for the band, but what were some of the other songs on the EP that really energized you guys when they were first written or performed live?

ML: I love “Fire Away” and always will. Since we wrote that pre-chorus/chorus it’s always felt like a huge stadium rock song. That being said, once we were done with “Rolling 7s” and performed it live for the first time, we knew we had something really special. The entire audience was bouncing along with us and we knew we had a good one in “Rolling 7s”.

MCB: How have streaming services such as Spotify and Apple Music helped the band? On the flip side, what have been some pitfalls of using those tools?

ML: Streaming’s definitely a more shareable and usable platform than say vinyl or CDs. Being added to curated playlists is an essential part of breaking a band and we’ve been fortunate enough to have some good placements in that regard. Anytime I find new music I like, I can share it in a link to my friends via text or whatever–it’s just way easier. That being said, there’s still a lot of people at gigs clamoring for us to make hard copies of our music to sign and to pop in the car.

MCB: Your festival schedule this summer looks massive. What acts are you most looking forward to seeing and hopefully hanging out with?

ML: I’ve pretty much seen everyone I want to see in concert before. But it will be great to catch up with Slash, Myles, and that band before going on the road with them, and it’d be awesome to meet [Dave] Grohl again and finally meet Taylor Hawkins.

MCB: “Retro” is an easy word for writers to throw around when they see or hear a new four-piece, bare-bones rock band gaining traction these days. With a lot of your social media posts featuring black and white photos and videos à la ‘70s arena rock, do you fear being labeled a novelty act, or do you think there’s something brewing in the underground that will eventually render those terms and conceptions meaningless?

ML: For some reason, all of rock ‘n’ roll is now called “retro,” so whatever. Everyone from Leon Bridges, Gary Clark Jr., and Marcus King have been considered retro, and who the hell is better than those guys? We definitely have influences, but I think the fact that you can’t pinpoint one singular influence is a compliment than a detriment. As Frank said from KLOS (and I’m paraphrasing), “I hear influences from The Black Crowes, AC/DC, Zeppelin, and Aerosmith.” That’s 30 years of musical history, and quite frankly there hasn’t been much after the Black Crowes that’s been all that interesting in rock ‘n’ roll other than Muse, who again had been compared to Queen all day. People just like to categorize s***, but at the end of the day, it’s all just sexy rock ‘n’ roll that’s good for your soul.

MCB: For each band member, what are two albums you can listen to from start to finish at any point?

Marc LaBelle (lead vocals): Toys in the Attic by Aerosmith and Shake Your Money Maker or By Your Side by the Black Crowes

Justin Smolian (bass): Appetite for Destruction by Guns ‘n’ Roses and Abbey Road by the Beatles

John Notto (guitars): Any of the first 5 Led Zeppelin Records, The Game by Queen or Appetite for Destruction

Dirty Honey will be at Zydeco on Thursday, April 4th, along with Red Sun Rising and Goodbye June. Zydeco is located at 2001 15th Avenue South, Birmingham, AL 35205.