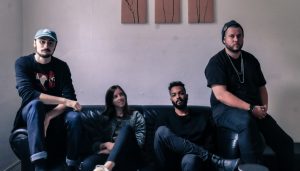 On January 20, Philly post-punk outfit Church Girls performs at The Nick. Five days later, they release their new album, Cycles, an electric journal of relationships and the corrosive effects of substance use and other barriers.

Between holding down a life at home and spending serious time on the road, bands face a lot of unavoidable strain. Good musical chemistry doesn’t always reflect healthy interpersonal chemistry, and sometimes the best course of action is to go separate ways, even though it hurts.

Church Girls has been through quite a few changes since their beginning in 2014. Singer Mariel Beaumont has found release from those growing pains in their music. “It’s cathartic,” Says singer Mariel Beaumont. “It’s a way to say what needs to be said.”

The band has lately toured far and wide, finalizing their current lineup just before a jaunt to the UK. Church Girls is now Mariel Beaumont on vocals and rhythm guitar, Joseph Wright on lead guitar, Michael Liszka on drums, and Vince Vullo on bass.

Influences shine through between the dark angst of bands like Interpol to the brighter side of Dinosaur Jr. There’s a healthy dose of Diet Cig there, too. Beaumont’s voice is rooted in indie songwriter sensibilities, and she demonstrates some vocal versatility to cut through the mix. Her delivery ranges from mellifluously melodic in her more cathartic moments to a near-deadpan à la Courtney Barnette.

“I started out with a lot of singer/songwriter stuff,” she says. “I’m sometimes asked to do solo shows, and it’s tricky going back to one guitar. You can tell the singers who are used to playing solo, playing those big full chords even with a band around them. The trick is figuring out how to fit what you’re used to doing into the new mix.”

For Cycles and its supporting tour, the band has embraced the bolder, more aggressive attitudes that come out playing live. Their new sound was largely influenced by the crowd feedback they’ve noticed on tour. “We had been playing a lot of DIY and basement shows, the kind I went to growing up,” says Beaumont. “The punk songs got a bigger response. The crowd would start moshing.”

The harsher musical treatment has proven the perfect complement to Beaumont’s introspective lyrics, imparting feelings of resolve, remorse, or tragic optimism in turns. It was a true post-punk record in the making. “The darker themes lend themselves to a harder attitude,” says Beaumont.

Cycles explores relationships and the fraying ties that bond. Beaumont recalls the great divides that form with substance abuse and failure to communicate, and her lyrics sting with the candor and honesty that often seems to come too little too late.

“No Patience,” the record’s latest single, begins with a siren-wail guitar and a hard-driving bass. The electric rhythm guitar is fuzzy, but Beaumont’s tense recollections are crystal clear. It feels like the snapshots from the road are all leading to an ugly conclusion, and the song breaks down with an angry refrain.

Want for meaningful dialogue comes up again in “Dry Out,” as Beaumont looks back at the collapse of a previous lineup during a trying tour. “I put a lot of the blame on myself for not communicating well enough,” she says. “That’s an ongoing thing I have to relearn sometimes, to talk about the issues at hand. Don’t let them just carry on.”

The fuzz and instrumental battery are initially dialed back for “Cycles.” Beaumont laments the empty platitudes that pass for real discourse while arpeggios ring out over lithe cymbals. Layers of reverb and distortion pile on until we reach an earnest, emotional finish. The song reflects on the trying repetition of relationships. Things are good until they’re not. Amends are made, but then it all falls apart again. “I will show up when you call,” the lyrics assure, however, “You’re still my blood after all.”

Cycles will release on January 25 via Chatterbox Records.

Church Girls will be joined by Bible Belt, Kill The Clock, Participation Ribbon. The music starts at 10 p.m. The Nick is located at 2514 10th Ave South, Birmingham, AL, 35205. Get tickets HERE.